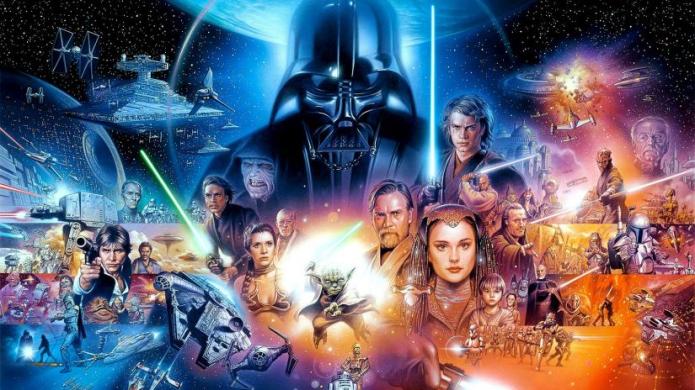 Happy New Year everyone! My apologies for not producing more content recently. I don’t want to call it a New Years Resolution, but let’s see if I can’t crank out some more stuff for you guys this month, alright? Let’s begin by ranking the movies in a franchise that I’m sure all fans would agree with and that will cause no divided opinions whatsoever: Star Wars!

I recently rewatched every tale from a galaxy far, far away in order to prepare for The Rise of Skywalker. Most of it was fun, parts of it were excruciating and it was an important reminder that sometimes when it comes to the things you love, you have to take the good with the bad. With that in mind, I thought it would be fun to do a post where I rank each film, talk about what I both liked and didn’t like for each one and then have Kevin chime in with some of his thoughts. I’m still sorting out how I feel about the conclusion to the Skywalker Saga, so we won’t get into that here. Maybe a future Let’s Talk About post, eh Kevin?

Without further adieu, here are my rankings. Should probably mention we’ll be getting into spoilers, but some of these movies are near or over 20 years old. What are you waiting for?

END_OF_DOCUMENT_TOKEN_TO_BE_REPLACED 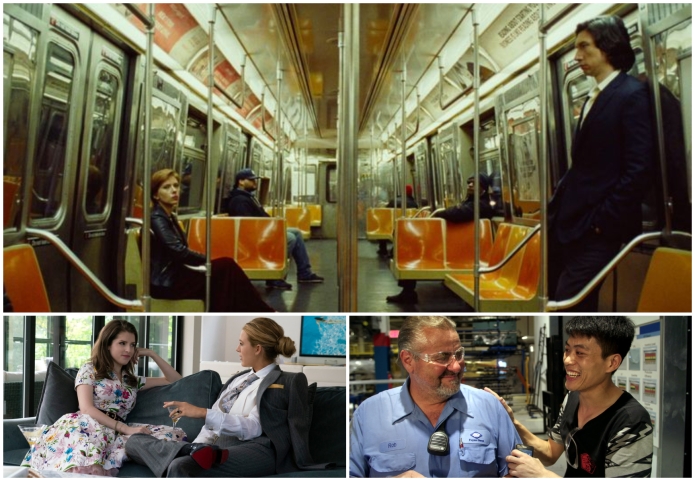 Hello and happy holidays! My gift to you is a list of a few films you might want to stream over this long weekend/holiday break. We are lucky enough to have endless entertainment at our fingertips but it can be overwhelming so here are a few of my recent watches that I want to recommend:

Marriage Story: Yes the memes are trying to shift the latest film by Noah Baumbach from a beautiful, yet unsettling, view of a collapsing divorce into an over-dramatic and self-serious snoozefest but I still think this film is worth your attention.

From the opening moments of professed love to the closing moments of sacrifice this film is enthralling through and through. Especially for those of us who have ever struggled keeping their sanity in a relationship, aka all of us. Come for the headliners of Scarlett Johansson and Adam Driver but stay for the destruction and celebration of love.

American Factory: This might be a stark departure from the previous movie but it’s a must watch. American Factory is a documentary about a Chinese glass company coming to America to create jobs and solve our country’s issues. Okay they’re actually in it for the money but either way this company finds a home in Dayton, Ohio and almost single handily employs a small city of blue-collar workers.

Of course, it’s not that simple, the company brings it’s own Chinese workers to help get the company off the ground. This creates cultural tensions and doesn’t always end well. The beauty of this documentary is it covers an array of issues including workers rights to unionize, cultural expectations of hard work, and the hardships of the working class but it never demonizes either side of any issue. It’s just a brutal and honest depiction of these, and many more, issues.

Brittany Runs a Marathon: Now as a three time marathon runner I am letting my biases get the best of me. Regardless, this movie is inspiring and heart wrenching and worth your time. Just be warned, it will definitely inspire you to get off the couch more often.

A true story of a funny, underemployed 20-something that decides to take one simple step to improve her life, start running. And she really does start with a single, simple, step as she huffs and puffs her way down one city block before eventually taking on her first 5k. From here on out the familiar beats of any “makeover” movie start to hit but the final act is full of surprise, cringe, and beauty that will make you question our society’s obsession with self-improvement. Overall an impressive debut for director Paul Downs Colaizzo who wrote the movie based on a former roommate of his.

A Simple Favor: A deliriously fun and engrossing watch from start to finish. The movie follows a meek mom vlogger Stephanie as she becomes unlikely friends with Emily, a career-obsessed mom who doesn’t take any bullshit. Emily, played intensely well by Blake Lively, suddenly disappears and Stephanie, played pitch perfect by Anna Kendrick, tries to uncover the truth behind the disappearance of her new friend.

This movie covers a lot of ground and delves into unexpected territory. A Gone Girl-esque thriller matched with director Paul Feig’s remarkable comedy. A thrilling and fun time all around.

Life in a Day: A free movie on YouTube that is powerful, stunning, and completely unique. People around the world were asked to document a certain day of their life, July 24th, 2010 and it was then crafted into a beautiful film that reaches every corner of the Earth.

As real as anything you will ever watch, this movie has a bit of everything: comedy, love, heartbreak, and is impossible to turn away from. For voyeurs, travelers, or film enthusiasts this is a much watch. This film illuminates the wonder, horror, and beauty of the world we share. 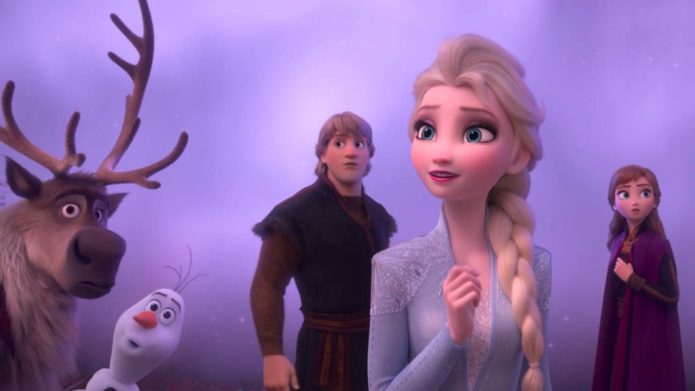 “That’s just your fear. Fear is what can’t be trusted.” -Elsa, Frozen II

It was about halfway through my rant about the importance of explicit representation to my wife that I realized I was ripping apart a Disney animated movie made for children. But let’s back up.

“Cowards!” I believe was my first word uttered walking out of a date night screening of Frozen II.

“I liked it and I had fun” was my wife’s response.

“Of course it was fun! And gorgeous! And funny! And charming! But…” I couldn’t hide my disappointment and I also couldn’t verbalize it.

Frozen II picks up a few years after the events of the original, ground-breaking (ice-shattering?) Frozen. Anna, Elsa, Kristoff, Olaf, and Sven live in the Arendelle castle singing songs about how great life is and how they never want things to change.

But Elsa can’t quite shake a restless feeling. After all, what is life without change? She is being called, somewhat literally but also figuratively, to a new adventure. She is grateful for what she has, her family, and her kingdom but there is something out there that she needs to discover.

And when she is finally forced to take action the movie follows our lovable group as they set off on a new adventure. Elsa is following a mysterious voice, Anna is following Elsa so she doesn’t get into trouble, Kristoff is following Anna so…he can propose marriage at the worst possible time, and Sven and Olaf are just happy to be there.

Yes, in this sequel, much like the original, the center of the story revolves around Elsa running into the wild to discover something about herself while her sister and a dude with confusing intentions follows behind. It’s a rinse and repeat of the prior arc except this time the movie feels foreboding.

The sing-song call that Elsa follows blindly is haunting, there are hints of a terrible truth about the sister’s ancestors and it bubbles around the surface, hell even the talking snowman is having an on-again, off-again existential crisis about his friends growing old.

The creators of this movie really seemed to be diving into something darker or deeper and un-Disney like for an animated movie. At some point I considered the possibility of a traumatic death, or a big reveal about a character’s sexual preference, or a statement on the long-term impacts of colonialism, or questioning of our society’s obsession with marriage. This journey felt different and more important and like they were gearing up to say something meaningful.

By the end, however, the big reveal was no reveal. Or at least no new reveal. Elsa learns to embrace her powers and that she can rely on her sister. It was a carbon copy ending of the original but without the epic rendition of “Let It Go”. It was a poor man’s retelling of Frozen but less entertaining that Olaf’s literal retelling of Frozen that occurs in the middle.

Which brings me to my cowards remark. Is it fair of me to demand the creators to take a huge risk with their beloved characters? Was I looking too hard at minor details as clues of an epic ending that did not exist? Do I have the right to be upset that they took an easy, unoriginal route in a movie that positively celebrates strong, independent women? Isn’t that aspect alone enough to satisfy my socially conscious mindset? What, exactly, did I want to happen? How did I want it to end?

I don’t have the answers. All I know is that the true beauty of the original Frozen was how different it was compared to a typical Disney princess movie. The original’s “twist” ending of the day being saved because of a sister’s love and not a man’s secured it’s spot as an all-time great film. That ending sounds trivial at this point in 2019 but in 2013 it was groundbreaking and important. And maybe that’s why I expected something bigger in this animated princess movie, because the original taught me it’s not only possible to push boundaries but it is important and necessary, no matter the genre.

So how did I want it to end? Without fear, I suppose, because even Elsa knows that fear is what can’t be trusted.