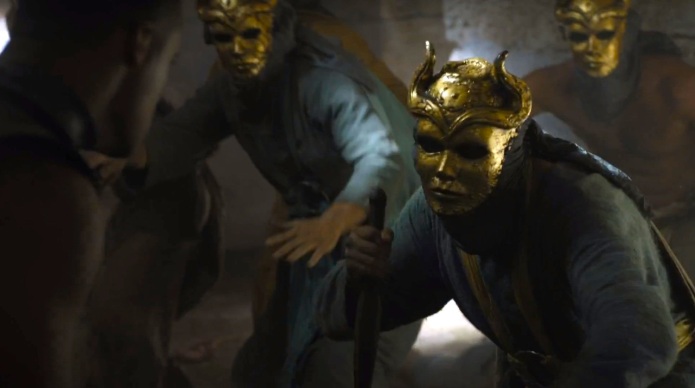 I told them all to go to hell. You did not belong along across the world with the bloody stone men. You are the Princess Shireen of House Baratheon, and you are my daughter.

Stannis Baratheon is a hard man to figure out. Back in season two, he was the scorned older brother with the most legitimate claim to the Iron Throne, yet he had no clue how to command the loyalty of the other lords. Renly knew how to do that. He was likable guy, charismatic and humble, yet he was younger than Stannis and no where close to the front of the line of succession. People supported him anyway because they didn’t want to support Stannis. The Lord of Dragonstone was not only extremely cold and rigid, he had forsaken the Faith of the Seven for the mysterious Lord of Light, represented by the mysterious and seductive Melisandre. Stannis couldn’t defeat his brother on the field of battle, so he used Melisandre’s magic to slay his own flesh and blood and steal all of the bannermen. When Stannis was defeated in the Battle of the Blackwater, he retreated back to Dragonstone, threw his friend Ser Davos into a dungeon and spent his time brooding and listening to Melisandre as she whispered into his ear.

In other words, Stannis was no one’s favorite character.

Flash forward to season five and my how things have changed. Not only was Stannis the only king who came to the aid of the Night’s Watch (you never saw the King in the North spare any of his men for the Wall) but now he’s the only one who wants to bring the Boltons to justice. And now we even get lovely little scenes like this, where Stannis reveals a side of himself that we never get to see. It was almost Ned Stark-esque in the way that Stannis revealed not only is he not ashamed of his daughter, but he did everything he could to save her when everyone else had already given up on her.

In other words, Stannis is one of the best characters on the show. He may have murdered his brother, but in the words of the Hound, there are others who are plenty worse.

END_OF_DOCUMENT_TOKEN_TO_BE_REPLACED

Two days ago, I saw a vehicle that would haul that tanker. You want to get out of here? You talk to me.

When I was a kid, I had a Mad Max video game for the NES. The object of the game was to drive around in your car, collect supplies, outlast the enemy cars in an arena and then defeat the boss at the end. Of course, I had to look all of that up because the game wasn’t particularly good and I don’t really remember playing it, but the point is I owned it. And until this week, it was my only experience with anything Mad Max related.

Despite its standing as one of the more innovative film franchises of the early 80’s, I somehow managed to avoid seeing any of the Mad Max movies during my 25 years on this planet. I know, right? I pride myself on being some kind of film buff but I haven’t even seen Mel Gibson wreak havoc in a post-apocalyptic wasteland? That just wasn’t going to cut it. I set out to rectify the situation and wound up picking up The Road Warrior on blu-ray. That’s right, I bought a movie I’ve never seen before just so I could watch it one time and review it for all of you lovely people.

Relax friends, I found it in the bargain bin at Walmart for like eight bucks. How crazy do you think I am?

END_OF_DOCUMENT_TOKEN_TO_BE_REPLACED

The city is flying, we’re fighting an army of robots and I have a bow and arrow. None of this makes sense, but I’m going back out there because it’s my job. And I can’t do my  job and babysit. It doesn’t matter what you did or who you were… If you step out that door, you are an Avenger.

I want you to take a moment to appreciate how far we’ve come. Three years ago, the mere concept of an Avengers movie was completely preposterous. Six different heroes stuffed together in the same picture with a little over two hours to tell the story? Yeah, right, that will never work.

Flash forward to May 2015 and not only has Marvel proven that it does work, but now shared-universe films are all the rage in Hollywood. DC is fast-tracking its own cinematic universe by throwing Batman and Superman together in a live-action movie for the first time and hoping for the best. Disney believes it can recreate Marvel’s magic with Star Wars and already a new trilogy and numerous spinoffs are in the works. What was once groundbreaking and innovative has become standard operating procedure at every major film studio, and while the novelty of an Avengers movie may not have the shine that it did three years ago, there’s no denying that seeing our heroes band together on the big screen remains an outrageously good time.

So be sure to soak it all in and remember how fortunate we all are to see such a healthy marriage between different mediums. And while Avengers: Age of Ultron may not exceed its own lofty expectations, it wasn’t for a lack of trying. I mean holy cow, they threw everything but the kitchen sink to try and raise that bar again.

END_OF_DOCUMENT_TOKEN_TO_BE_REPLACED

I already revealed my female ballot here. Now check out who I am voting for the male ballot. Oh and don’t forget to vote here Survivor: Second Chance.

Take a jump with me to see my ballot as I suck a few kneecaps and pander to the pandering.

END_OF_DOCUMENT_TOKEN_TO_BE_REPLACED

Oh nothing brings me more joy than pandering. And that is what 32 former Survivor contestants are doing right now. They are pandering, begging, and pleading to get your votes for Survivor: Second Chance. Meanwhile, us the fans are enjoying all of the attention. Maybe a bit too much.

Twitter, Reddit, Facebook, Survivor Sucks, and Podcasts have been bombarding us fans with interviews, posts, AMAs, retweets, videos, and campaign photos. We are at maximum overload of Survivor Meta. It is almost too much.

But what good blogger wouldn’t use this time to take advantage of these poor desperate people? And how cool is it to be a Survivor fan right now? This has to be one of the most fun and rewarding things the show has given us and I could not be more excited.

So take a jump with me to see my ballot as I suck a few kneecaps and pander to the pandering. And check out my male ballot here.

END_OF_DOCUMENT_TOKEN_TO_BE_REPLACED

Come on in guys for my Survivor Worlds Apart Episode 12 Review where I use classic Survivor quotes to assess the latest episode.

Before you leave a nasty comment I want to make it clear that there was an episode of Survivor last week and somebody did get voted off! Shocking right? But in between all of this hoopla for Survivor: Second Chance we somehow are forgetting that a pretty good season of Survivor is still currently on!

Now the only question is am I going to pander to the pandering Survivors who want a Second Chance? Am I going to take advantage of their desperation and post an article about who I am endorsing and then tweet it to them so I get some beautiful retweets? Am I really that desperate to take advantage of this giant marketing ploy? Yes, yes I am. Look for that article to drop soon.

Until then take a jump with me, watch out for spoilers and I promise to tell you about my worst birthday ever!
END_OF_DOCUMENT_TOKEN_TO_BE_REPLACED

With Avengers: Age of Ultron now available in theaters everywhere, Kevin and I thought it would be fun to rank all of the previous films from Marvel Studios and decide what is truly the best of the best. That part was easy. The hard part was going back and actually watching all of these movies again. Do you have any idea what kind of toll that takes on you? Kevin is pretty much an insomniac now and I’ve been sick for over a week. Can’t shake it.

That being said, it was a good time setting all of this up and a reminder of just how far the movies have come. We hope you appreciate it though, because it is extremely doubtful we will ever be doing this again. You know, until Captain America: Civil War comes out next year… just kidding, Kevin. Or am I?

END_OF_DOCUMENT_TOKEN_TO_BE_REPLACED

Come on in guys for my Survivor Worlds Apart Episode 11 Review where I use classic Survivor quotes to assess the latest episode.

If you missed it last week I took a break from my usual format to discuss some serious real-life issues being dealt with in Survivor.

Thankfully this week we find ourselves back on track into a lighter, more fun and strategic episode of the show we all know and love.

With that I have brought back my format of using famous Survivor quotes to assess the game. Make the jump with me and feel free to leave a comment!