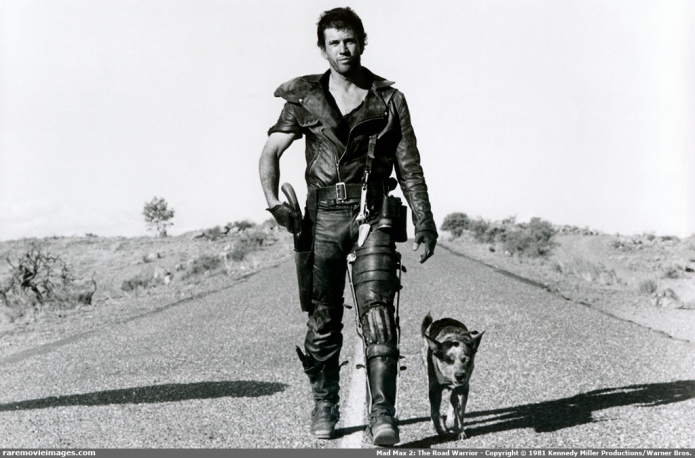 Two days ago, I saw a vehicle that would haul that tanker. You want to get out of here? You talk to me.

When I was a kid, I had a Mad Max video game for the NES. The object of the game was to drive around in your car, collect supplies, outlast the enemy cars in an arena and then defeat the boss at the end. Of course, I had to look all of that up because the game wasn’t particularly good and I don’t really remember playing it, but the point is I owned it. And until this week, it was my only experience with anything Mad Max related.

Despite its standing as one of the more innovative film franchises of the early 80’s, I somehow managed to avoid seeing any of the Mad Max movies during my 25 years on this planet. I know, right? I pride myself on being some kind of film buff but I haven’t even seen Mel Gibson wreak havoc in a post-apocalyptic wasteland? That just wasn’t going to cut it. I set out to rectify the situation and wound up picking up The Road Warrior on blu-ray. That’s right, I bought a movie I’ve never seen before just so I could watch it one time and review it for all of you lovely people.

Relax friends, I found it in the bargain bin at Walmart for like eight bucks. How crazy do you think I am?

You may be wondering why I skipped the original Mad Max and went right for the sequel instead. Seeing as I’m something of a continuity nut, I wondered that myself and the best answer I could come up with is that The Road Warrior is generally regarded as one of the greatest and most influential action films of all-time. I knew that it was the one movie in the original trilogy that I HAD to see before Mad Max: Fury Road comes out. That and I didn’t really feel like rummaging through Walmart’s bargain bin for two hours trying to find the rest of the trilogy. Have you seen that thing? It’s overwhelming, man.

The plot of The Road Warrior is refreshingly simple. Mel Gibson reprises his role as Max from the first film, a drifter with only an Australian Cattle Dog to keep him company. In addition to evading the various gangs who roam through the wasteland raping and pillaging, Max is also on a never-ending search for food and supplies. Gasoline is especially rare and valuable. If you don’t have any, it means you’re dead. If you do have some, it means someone else is going to try to kill you and take it. It’s all fun and games in post-apocalyptic Australia! Eventually, Max is led to a small outpost that has been settled around an oil refinery, and unsurprisingly it is under siege by a madman named The Humungus and his gang of batshit crazy marauders, including Wez, a man who holds a grudge against Max.

And from there, things are pretty straightforward. We have our villains, we have our innocent settlers and we have our reluctant hero who gets caught in between the two groups. This may sound sadly predictable, but in an action movie the plot is seldom the most crucial aspect. What I’m really interested in is if the action and stunts are well-filmed, if there is constant tension surrounding our hero and whether or not I am entertained. Did The Road Warrior satisfy all of that criteria?

Why yes it did. Director George Miller has a keen understanding for how to film action scenes that are highly intense and completely engaging. Keep in mind that this movie was released back in 1981, when special effects were still quite limited and CGI was barely even on the horizon. In my opinion, that makes it all the more impressive. Miller doesn’t use stunts as a crutch. He doesn’t include them just for the sake of including them (I’m looking at you Michael Bay). He times them perfectly, allowing the tension to build and build until we reach the moment where a big collision or gruesome death doesn’t happen for no reason, but is done to enhance that particular scene or advance the story. The Road Warrior has an authentic feel that you rarely see in action movies today, and I think that’s a big reason why people look back on this film so fondly.

As for Gibson, this is the movie that made him a star (you know, until he sort of went cuckoo later in his career). Max is not out to make the wasteland a better place. Safeguarding the helpless is not high on his priority list. He is a damaged person and is only concerned with his own survival, and while he may not go to the extent that the marauders do to ensure his safety, he certainly isn’t afraid to get his hands dirty if it means he gets to live for another day. That’s what living on your own in this hellish environment will do to you, but it also makes Max highly vulnerable. Strength in this world is in numbers, and the fact that Max is making it on his own speaks volumes to his own capabilities, but at the same time he is always on high alert. There is never a moment in this film where I would consider Max to be completely safe, and it’s that sort of tension that keeps you on the edge of your seat. Great action films keep the protagonist in a constant state of danger, and The Road Warrior certainly succeeds in that capacity. It is also delightfully devoid of cliches, which is always a good thing.

The Road Warrior never set out to be anything more than an entertaining movie. It does its job and does it well, but by doing so it raised the bar for action films that succeeded it. Almost 35 years later, it still holds its position as a landmark piece of work in the genre. If you appreciate the craft that goes into making an action movie, you will love this.