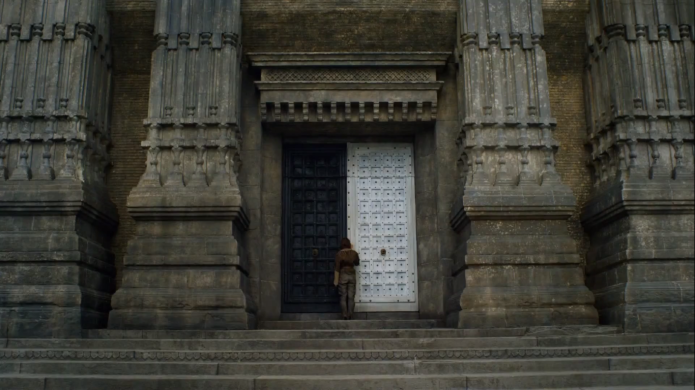 Tyrion Lannister’s greatest asset has always been his wit. Whether he is formulating a strategy on the fly or cracking a joke, he always knows what to say and what to do at precisely the right moment. It is that mixture of keen intellect and deadpan humor that subverts Tyrion’s status as a dwarf, and it’s what has kept him alive for this long while bigger and stronger men have dropped around him like flies. Beneath that lies something even more valuable: a basic understanding of the world and how things are. He and Varys have that in common. It’s why they have made such a great team in the past and why they currently find themselves together in a stuffy wooden box, riding into the unknown.

There are two kinds of rulers in Westeros: ones who are monsters and ones who are repulsive. Varys believes that Tyrion is the key to establishing Daenerys Targaryen as the Queen of the Seven Kingdoms, but Tyrion has been a slave to a monster before and has no intention of finding himself in that position again. Considering that the last Targaryen in power was known as the Mad King, his reluctance to follow Varys’ plan may be well-founded.

If Tyrion is skeptical now, just imagine what he would think if he were actually in Meereen, watching chaos unfold in every brothel and at every public execution. Sacking a city and promising thousands of slaves their freedom will earn you love, respect and a bunch of fancy nicknames, but it doesn’t guarantee you a thing beyond the burden of heightened expectations. Keeping power is far more challenging than just taking it, especially when you risk losing it by clinging to old-fashioned ideals such as justice. That’s always been Dany’s thing, to answer injustice with justice, but it rarely works out as well as it sounds on paper, especially when it means executing one of your most loyal advisers. Tyrion likely would’ve handled the matter differently had it occurred when he was Hand of the King. Knowing when to show your strength and when to get ahead of a bad situation is the mark of any true politician, something that Dany would surely benefit from having around.

It’s hard not to feel an overall sense of detachment from Daenerys’ storyline. While I wouldn’t go so far as to call the events in Meereen boring, they do all seem rather inconsequential. Will Meereen be the stronghold where the people of the world make their last stand against the White Walkers? Will King’s Landing be abandoned for a new capital city across the Narrow Sea? Not likely, and that’s one main reason why fans of the show are so frustrated with Dany. She’s just so far removed from everything happening in Westeros, has been from the start and is displaying no sense of urgency to close the gap between herself and the Iron Throne. Another reason why Dany’s story has grown tiresome was her banishment of Jorah, a fan-favorite all of us can sympathize with because we all know what it’s like to grow close to someone extremely attractive only to be promptly placed right in the friend zone. Sure, Ser Barristan, Daario and others remain by Dany’s side, but Jorah’s absence is notable because he’s been around since the beginning.

Prince Doran Martell is another repulsive leader, but you wouldn’t know it by looking at him. Restricted to ruling from his chair, he lacks his brother Oberyn’s charisma as well as his agility, meaning he can’t appease Ellaria Sand and he can’t join Myrcella Baratheon for a stroll in the Water Gardens. Doran is a good man, to be certain. He loved his brother and he is firmly against the mere idea of mutilating Myrcella, but he is also a frail man. Much like Dany is experiencing in Meereen, too much unrest in his city could cause his followers to act in defiance against his orders. When that happens, it’s not as if Doran will be able to leap from his chair and fight for what he believes in. The presence of Jamie and Bronn will only further complicate the situation, providing that Ellaria and the Sandsnakes (Oberyn’s bastard children) don’t just try to kill the duo outright. I mean really, all those sparring sessions and how much better has Jamie really gotten at fighting with his left hand? The time spent building up this confrontation was brief, but that should change in the weeks to come.

One person who has gotten a whole lot better is Samwell Tarly, who found his courage before slaying that Walker and hasn’t looked back since. Another one deemed too repulsive to ever amount to anything (he is really fat, you see), Sam has the respect of his Night’s Watch brothers because he always tells it like it is. Why yes, Janos Slynt was hiding in the larder with the women and children. Alliser Throne did indeed fight bravely defending the wall, despite being an unceremonious prick. Aye, it was Jon Snow who took over when Alliser fell, and Jon whose been destined to lead the Night’s Watch from the moment he arrived at Castle Black. Had Jon accepted Stannis’ offer, I’m not sure that Sam would have gone out of his way to get Jon elected. And there was a time when Jon would have done anything to be a true Stark. To feel like he belonged at Winterfell and had a place in the world. Being Ned Stark’s son always comes with a price though, and in this case it meant turning down something he’d wanted all his life so he wouldn’t break his oath. This time though, Jon’s steadfast honor was rewarded by the loyalty of a friend, solidifying the fact that they are both right where they belong.

As for the other Starks, I doubt they care much who is ruling or whether or not that person is a monster. Sansa and Arya are all about surviving these days, but more importantly, they seek vengeance for all of the atrocities that have been afflicted upon their family. It’s why Sansa turned away Brienne, much like Arya did last season, because she’s grown to be very suspicious of any outsiders. Even ones who appear to have good intentions. Littlefinger is a shady individual, but sometimes the devil you know is better than the one you don’t. That’s certainly a lesson that Arya has learned ten times over, prompting her to be wary of the Faceless Man even after he takes the appearance of Jaqen H’ghar. And while it’s a good thing that Arya will be trained to effectively avenge all the fallen Starks, like Dany she is now entire continents away from all of the names on her list. It’s just going to be a while before we see some actual progress to crossing any of those names off, and that too is extremely frustrating.

“The House of Black and White” may have been most directly concerned with events taking place away from Westeros, but thus far the Wall has been home to the proceedings that I find the most compelling. Partly because Stannis seems to be the only one who cares about righting all the wrongs that have occurred over the course of the series, and mostly because after all this time, it’s nice to have a character we love in a position of power at Westeros. Even if he is a repulsive bastard.