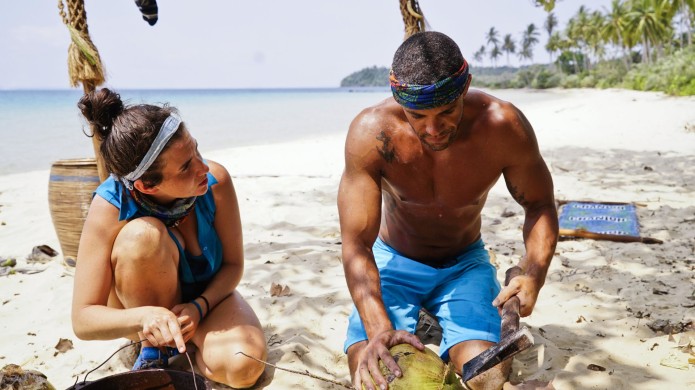 Come on in guys for my Survivor Kaoh Rong Episode 4 review where I use classic Survivor quotes to assess the latest episode.

This week we…hold on a second I need water over here! We have a writer down! The entire Pegboards staff are essential and we need them out here now! Grab umbrellas, water, ice, a helicopter, whatever you can find!

Whew okay that was a close one, looks like she’s going to be okay. As I was saying, this week on Survivor we had a…uh oh…two more writers are down! We need medical attention stat! Jesse hold onto this guy’s legs! And use a notepad to fan him down!

Damn okay. We lost one. I think that just proves that here at Pegboards our writers are giving it their all.

Alright dig in the sand below to find the button and click it to read my analysis of the episode. Spoilers below.

In this spot I was going to just put a line of crying emojis. I even asked for Jesse’s blessing to use emojis on our blog. He said it was okay as long as I could live with myself afterward. Ah ha! Jokes on him, I have no journalistic integrity! Anyway, this blog doesn’t have the option for emojis on it. Thanks a lot WordPress. Which is a good thing for, you know, humanity but a bad thing for me. So just use your imagination, this week’s quote of the week is crying because that is all that happened.

I want to make something clear here. Survivor is a TV show. It’s fun, ridiculous and entertaining. I enjoy the show because it’s a very difficult strategy game wrapped into a social experiment. So I’m not going to spend my time writing about bullies and people’s feelings. I did enough of that with Shirin last year. The Survivor community’s response to how Alecia was treated has done enough to make it clear that you don’t mistreat people no matter how hungry or sun burned you are, okay? So I’m not reiterating that here because, frankly, I am sick of hearing about it and I want this blog to be fun.

With that in mind I want to be clear that this week’s dumb move has nothing to do with how to treat people for ethical reasons because we all know the golden rule, alright? This has to do strictly with gameplay. And it was piss poor gameplay by Jason and Scot.

You know what, no, I’m not even going to talk about the Beauty and the Beast(s) drama between Alecia and the two guys. Just know that in a social game it’s a bad move to isolate players.

Instead I’m going to talk about how dumb it was to fight so hard for salt and pepper at that reward challenge. I get it, you’re all super competitive but come on, salt is bad for you anyway.

Two weeks ago I stood on my stump and declared that Liz would rule over the Brains tribe and be in a great spot to win the game. Last week I deduced that Alecia was not hopeless and actually had a shot to win the game. I am very, very bad at this prediction thing.

I have thought about this very seriously this week. And I think I finally figured out exactly how this game is going to turn out. You ready for this?

The weeks leading up to this season Jeff Probst talked about how it was the most brutal season on record with the harshest conditions and possibly multiple medevacs. With that in mind, I believe the winner of this season is obvious. Dr. Joe. No no, not the old man on Brains who is more worried about his abs than the game. I’m talking about the guy that pulled Caleb from the game. Think about it. Dr. Joe has an accent which means he probably isn’t allowed to play in the American version of Survivor. But he wanted to play so bad that he created the greatest strategic plan of all time. He went to med school, studied hard, worked his ass off and applied to be the Survivor doctor for years and years. Finally he got the call back. He was to replace the beloved Dr. Ramona on the show. Being the strategic mastermind he is, he played it cool for a couple of seasons, waiting for the perfect season to strike. Well now here he is, in the perfect conditions of Cambodia. He can simply eliminate each contestant one by one by determining them to be at risk if they continue to play the game. It’s masterful game play. It’s The Prestige level of commitment. It’s a game changer.

Now I know what you are saying, “but why didn’t he take out Debbie and Cydney when he had the chance? Why only take out Caleb?” Because, like I said, he is a genius. He can’t raise too much suspicion so early. He has to continue playing it cool, only taking out the big threats at the perfect moments.

So who has no shot to win? Everyone on this season if the dynamic duo of Mother Nature and Dr. Joe have anything to do with it.

This is a sticky situation here because we have three strong alliances going on. One on each tribe. But it looks like next week a swap is coming which can change everything up. So I will just say this, the tribe that has a majority in the swap should just stick to the plan and get rid of the others. I know it sounds obvious but it never seems to happen. Stick together until the merge people!

This is my island! (AKA who is running the show)

Outside of Mother Nature and Dr Joe? I still think Anna has a lot of the power in this game. She needs some luck in the swap to stick with her girls but she is definitely the leader of that alliance and it seems like she is very adaptable which is a huge advantage in a quick changing game. I am foreseeing her to go far in the game with lots of control.

Just a reminder, I was high on a Brain girl, then a Brawn girl and now a Beauty girl. So this probably won’t end well for Anna.

Poor Caleb right? First the guy has to go on Big Brother. And then he finally makes it on a good show like Survivor and he gets taken out of the game. Wait a minute. Don’t pity this guy. He is guaranteed to come back and play again. Of course, when he does he will be a forgettable post merge boot. I’ll say he will get 11th place on the next All-Star season. Prove me wrong Caleb!