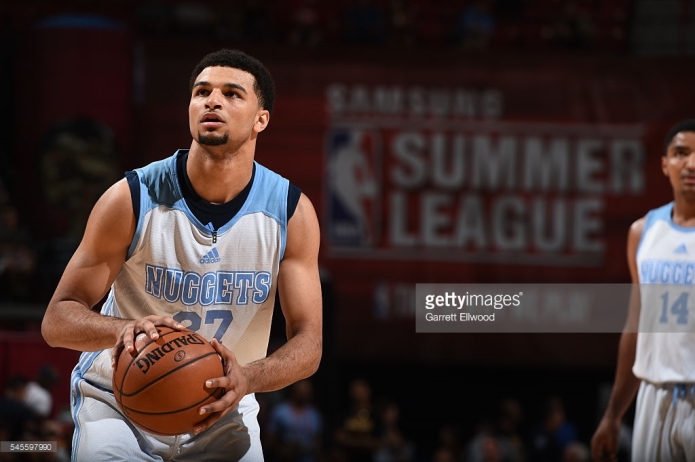 The Nuggets’ courtship of disgruntled and declining superstar Dwyane Wade was curious, to say the least. Not only did Wade represent an odd fit into a crowded and youthful backcourt, but it was pretty obvious to everyone, including Kevin and I, that Wade never had any intention of taking what’s left of his knees to Denver. He simply used the Nuggets as leverage to land a better deal with the team he really wanted to go to, which most of us thought was the Heat but actually turned out to be the Bulls.

Just to make sure that there were no hard feelings, Wade did send out this tweet to show his gratitude for the Nuggets’ interest in him. “Sorry guys, but I only want to be friends with you.”

On the other hand, I can’t remember the last time that a top free agent even agreed to sit down with the Nuggets brass, much less entertain an offer from them. So should we be upset that D-Wade spurned us to play for his hometown team?

Eh, not really. Hit the jump and I’ll tell you why.

Regardless of whether or not Wade was ever planning on signing with the Nuggets, the fact that he showed any interest in them at all is a good sign for the future of this franchise. As I touched on before, Denver is not a desirable landing spot for most NBA players. It’s a great city, sure, but it’s also a lackluster basketball market, has a team that is still very much in rebuilding mode and a fanbase that mostly tunes out when the team isn’t competitive. The Nuggets finished dead last in home attendance last season, so the proof is in the pudding.

Despite all of that, D-Wade actually thought about making Denver the place that he left Miami for. This is a rather jarring shift from the kind of consideration the Nuggets usually receive from free agents. In the age of the superteam, this could be huge for the fortunes of the organization. Let me explain.

Kevin has a theory that in today’s NBA, tanking your season for a top draft pick is no longer the best way to go. In order to truly build a league superpower, you have to collect a lot of assets and stockpile young talent. You cultivate that talent and hope that it develops into a promising young core. You make some noise in the playoffs. All the while, you save plenty of cap room so that you can afford to hand out a max contract or two. As Kevin theorizes, the easiest path to a championship is the one where you can fit as many stars on one team as possible, and that’s why you see Lebron James teaming up with Kyrie Irving and reeling in Kevin Love. It’s why Kevin Durant risked his reputation with the basketball world by joining the already stacked Warriors.

In the age of the superteam, everyone has a price they’ll pay if it gives them the best chance at the finals.

While I think Kevin’s opinion is pretty much spot on, I don’t necessarily believe the only reason the Nuggets pursued D-Wade was to build their own superteam. I believe that they really did want him, if only to increase their national recognition and to put more butts in the seats at the Pepsi Center. D-Wade signing here would’ve accomplished that, but him not signing here accomplished something else. It suggests that the Nuggets, if they play their cards right, could be a candidate as a superteam down the line.

There is no shortage of promising young talent on Mike Malone’s roster, including Emmanuel Mudiay, Nikola Jokic, Gary Harris, Jusuf Nurkic and Jamal Murray. If just a few of those names pan out as high quality players and Malone gets what he can out of the veterans, then maybe the Nuggets make a playoff push as early as this year. Maybe by next year they can tip the scales of the playoffs much like the Warriors did when they first broke out onto the scene. And then 2-3 years from now, maybe there will be a star or two who look at Denver and decide that it’s not a bad spot for their very own superteam.

Or maybe I’m just really naive and none of this will happen. That’s an equally possible outcome. We won’t know for sure until we see what these kids are made of.

Sure, Wade used the Nuggets and then went to the team that he wanted. But maybe he liked what he saw here. And maybe others will too.