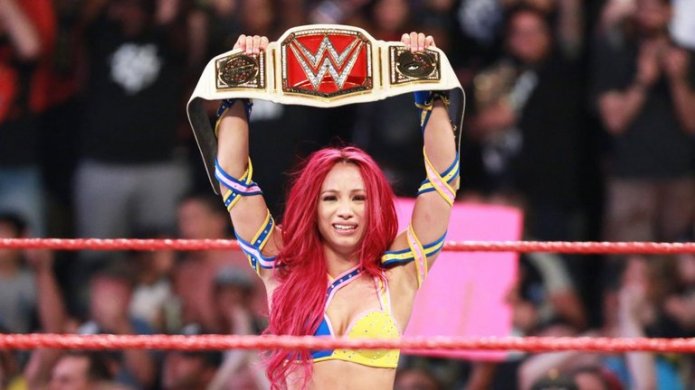 (Eric Schreiber, who co-wrote the Battleground predictions and results articles with Jesse, will be posting a Raw recap every week, or at least until he gets sick of working for free.)

The New Era has finally begun, Raw is without a champion, and there are more questions than answers coming into this night. I for one was not expecting a lot of the things that I saw. I expected the same old same with Roman Reigns winning whatever hurdle they put before him and going to Summerslam to face Seth Rollins, especially when they named the two fatal four way matches and their contestants. There were two major points I would love to focus on a bit more: First the fatal four way matches and the main event, second the women’s championship match.

First: The two fatal four way matches composed of Cesaro vs Rusev vs KO vs Balor and the other featured Sheamus vs Sami vs Jericho vs Reigns. The first one saw a great revival of an intense NXT feud between Balor and KO where Balor went right after KO. The match had some high spots that involved good pops, but I truly thought Rusev would be the heel to win (only because I was thinking heel vs face for the main event) and because he’s been a powerhouse. I thought Balor would be great in the match, but I didn’t see him knocking off other major stars on his debut. Sure enough he surprised us all with a great win to move on to the main event of Raw on his debut. Once again Cesaro and KO get snubbed, and Rusev is a mid-card powerhouse and nothing more.

The second fatal four way match was a great way to fit as many stars into the Raw card as possible while dangling the new championship in front of them all. Sheamus is outdated, Jericho is there to put over young talent (which he does wonderfully), Sami Zayn is a wonderful underdog I would love to see win and Reigns gets booed worse than any heel, or dare I say, John Cena even. Nonetheless after a hard fought match, Reigns is victorious and will face Balor later in the night for the number one contenders match.

A few side notes: The Universal Championship is the worst name for a title I have ever heard and think they should have at least gone back to WWE Championship and World Heavyweight Championship. Seth had the night off in an attempt to show case new stars for the show and of course I am excited to see The Club get the titles off of the New Day. I also love hearing Enzo and Cass and their wittiness. Too many tag teams at this point, but hopefully they can build good feuds like when they had Edge and Christian, the Hardy Boys, Dudley Boys, and APA.

Not a lot of people thought Dean Ambrose would remain champion after Sunday’s Battleground. And Jesse did have a complaint that the Women’s Championship was not being defended regularly which was lame. Well not anymore. Not only was the title defended on Raw, it was unsuccessfully defended by Charlotte and therefore we have a new women’s champion, Sashaaaaaa Banks!!! The Boss has arrived and the fans went crazy when they not only saw Charlotte get dethroned, but she got dethroned by the one woman whom everyone has wanted to see from beginning with that title. The fans were cheering “YOU DESERVE IT!!!” and that she truly does. Congratulations to Sasha, the Boss, Banks.

Finally to our main event! I will admit that I was completely pessimistic about this match and I was dreading another Seth Rollins vs Roman Reigns match for the third ppv in a row, especially with his drug violation (which yes is a punishment). Balor was getting tossed around like a rag doll at the beginning and truthfully I thought they are just building Reigns up again with the same old dominant performance. Luckily though, after a great finish, Finn Balor made one of the biggest upsets in recent WWE history and that was pin Roman Reigns to earn the right to face Seth Rollins for the WWE Universal (ugh) Championship!! This shows that at this time WWE is committed to the New Era and the young underdogs getting a fair opportunity to get over and make a name for themselves.