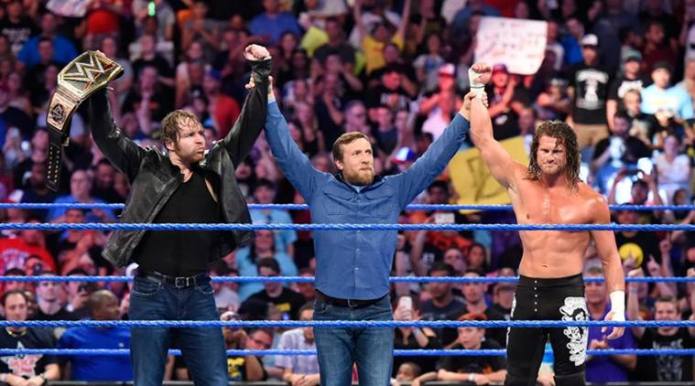 Anyone who watched the WWE Draft two weeks ago could tell you that Raw came away with a stacked roster and SmackDown… well, SmackDown was going to take some work. Sure, the blue brand got the WWE Championship along with John Cena and A.J. Styles, but there was a dearth of established talent on the undercard and a noticeable void of other titles.

When Raw put together one of its best episodes in recent memory, with the spotlight directly on Finn Balor and Sasha Banks, it became even more of a daunting task for SmackDown to stand out on its own. And for the most part, it didn’t. The commentary team lacked chemistry, the women’s division is cluttered and they didn’t feature any of their top NXT draft picks. Sure, American Alpha will be on this week, but you think they would’ve debuted and made an impact like Balor did.

SmackDown obviously isn’t going to find its footing overnight, but in the meantime its turning to the star power of Dolph Ziggler to captivate the WWE Universe and generate ratings on the way to SummerSlam.

That’s right. Dolph Ziggler. After nearly two years of jobbing to basically every top heel in the company, Ziggler won the Six-Pack Challenge to become the no. 1 contender to Dean Ambrose’s WWE Championship. In my opinion, this was as shocking as Balor pinning Roman Reigns on Raw, but for a different reason. No one really expected Balor to receive a main event push so soon, while we’ve been conditioned to never expect anything good to happen to Ziggler. The guy has won like three matches over the past year and a half. He hasn’t been a world champion for three years. On top of all that, he pinned A.J. Styles after hitting the Superkick, which I’m positive he has never put anyone away with before.

There are some fans out there who have already discredited this outcome due to the way that Ziggler has been booked recently, and that just because it was a surprise doesn’t mean it was a good decision. I’m not as critical of it for two reasons: 1) There wasn’t really a better choice among the other five guys and 2) It’s an opportunity to repackage Ziggler and make his character fresh. I think a lot of people preferred to see A.J. Styles win, but he has to have his rubber match with John Cena. Once that’s done and with Cena scheduled to miss the first SmackDown pay-per-view, Styles will undoubtedly be receiving his title shot. Be patient, smarks.

Beyond Styles, there just wasn’t really any other great choices. I would like to see Bray Wyatt be treated as more of a monster heel, but he’s squared off with Ambrose on numerous occasions. Baron Corbin or Apollo Crews? That’s not much of a showdown for Dean’s first title defense as SmackDown’s champion. In a way, Ziggler was the only choice. It’s a fresh matchup that will more than likely be a highly entertaining bout. The only question now is what kind of story they will tell.

Like I said, this is a perfect time to either turn Ziggler heel or add a much needed edge to his character. For too long now, the Showoff has loitered in mid-card hell, content on stealing the show but never making much of an impact on the landscape of WWE programming. If they don’t make him a bad guy, I’d like Dolph to at least act more aggressively during what could be his last legitimate chance at championship gold. We can count on Styles vs. Cena to provide us with a big match feel and Randy Orton will be around doing Randy Orton things, but the Ambrose/Ziggler buildup is crucial to SmackDown’s success for the immediate future. If the feud falls flat, it will be hard for Shane McMahon and Daniel Bryan to get out of Raw’s shadow.

As far as NXT goes, Shinsuke Nakamura is more or less the top face at the moment and I’m excited for his title match with Samoa Joe at NXT: Takeover. Actually, that distinction probably belongs to Bayley, but Nakamura was featured a lot more this week while the Hugger was relegated to a backstage segment with William Regal. They’re just placing more emphasis on the NXT Title at this point, but I expect Bayley will get more TV time as she prepares for her rematch with Asuka.