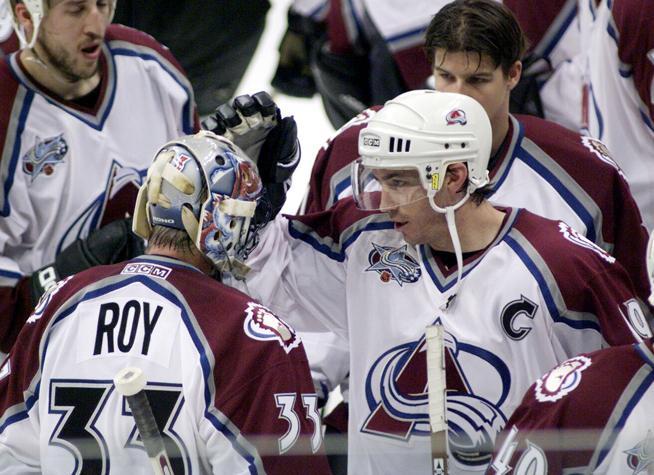 I could spend a whole blog calling Patrick Roy a quitter or selfish. I could spend another whole blog defending the man who backstopped the first major championship for the state of Colorado. I could kick and scream and bitch or I could sell you the idea that the Colorado Avalanche are better off. But I’m not going to do that.

To put it simply, Patrick Roy stepping down as the Avalanche head coach sucks. The timing was awful and, while it was a poorly kept secret that Roy was a below average NHL coach, it still sucks to lose a man who bled burgundy and blue.

Yes from a coaching stand point the Avalanche are probably better off. And perhaps it was inevitable and perhaps they dodged a (PR) bullet by not having to fire their former star goaltender at some point in the future. But if you came here for me to tell you that everything is going to be alright or to help guide you through who the Avs are going to grab as their new coach, I’m sorry but you came to the wrong place (this might give you some clarity though).

As excited as I am for the future of this franchise, thanks to the likes of Nathan MacKinnon, Gabriel Landeskog and Matt Duchene, I am also very scared. And it’s not because St. Patrick took his puck and went home. It’s how Roy went about quitting that concerns me.

Let’s break down the timeline of events that occurred.

Breaking it down that way and it is clear that there was a schism in the front office. Roy wanted to be aggressive, Sakic wanted to retain talent and stay under the salary cap. Classic story right?

Now I want to breakdown the communication made by Sakic and Roy.

I have thought long and hard over the course of the summer about how I might improve this team to give it the depth it needs and bring it to a higher level. To achieve this, the vision of the coach and VP-Hockey Operations needs to be perfectly aligned with that of the organization. He must also have a say in the decisions that impact the team’s performance. These conditions are not currently met.

This part of the statement implies he was not pleased with the amount of power he held.

“I know we were on the same page. Patrick was consulted on everything. As I was getting comfortable in my role, I relied on him more and now as we built up our staff, with a staff we all really trust, especially in season. It allowed Patrick to keep his focus more on coaching.

“We’ve never had an issue with not getting along. He was consulted on everything. We were friends then, and we’re friends now.”

In the first read through it sounds like Roy was a big part of the process of big decisions. But when you (or at least, I) read between the lines you can sense Sakic chose his words very carefully. He repeated the word ‘consulted’ twice but then he emphasizes his own growth in the position and the growth of a trusted staff. And then he lays the final blow by explicitly stating their goal was to allow Roy to focus solely on coaching.

Do you see the dissonance here? And could you blame Roy for feeling like he was getting forced out of the decision makings? Sure Roy was asked his opinion but was he taken seriously?

“We’ve never had an issue with not getting along. We were friends as players, we’re friends now. Patrick called me this morning and said that the last three or four weeks, he was wrestling with this and he just let me know that he was going to resign (Friday). I just asked him if he wanted to give it some more thought.”

Look I know Sakic is a proud man and that Roy is a grown man but if I told Jesse I was resigning as co-owner of Pegboards due to a lack of respect and he responded with, “ok, you want more time to think it through? No? Alright, bye”, I would be a bit upset. It would tell me that I was right, I was being phased out.

My point here isn’t to defend Patrick Roy against Joe Sakic demoting him. In fact, Roy has to take a huge load of the blame for his own actions and decisions. I’m only speculating what Roy was thinking to leave his beloved franchise and friend in tight spot. I think he thought that the Avalanche weren’t pleased with the last two seasons and were slowly planning on moving on from Roy in the near future. And that they probably planned to slowly take some power away from him in order to see how he did when he focused solely on coaching. And depending how that experiment went they would move on from him or rework his contract and his title to continue that focus. My theory is they expected this shift of power would drive him to quit, they just didn’t expect it to happen so soon.

In my opinion the front office knew there was a problem. And they were right, moving on from Patrick Roy as the head coach is probably the best decision. What scares me is how they went about doing it and the politics involved. It seems like a stronger franchise would’ve had the guts to make the tough call by themselves. Pulling the rug out (slowly) from under the coach could give the organization a bad reputation. And now, they are left to pick up the pieces as they scramble to find a semi-reputable coach to help lead a strong, young core to the next step.

2 thoughts on “The Art of Roy”