Come on in guys for my Survivor: Millennials vs Gen X Episode 4 review where I use classic Survivor quotes to assess the latest episode.

Alright I know what you’re thinking, where the hell was last week’s episode recap? How the hell were you, my faithful readers, supposed to know what the hell was going on in this crazy game of Survivor without my expertise? Well I have plenty of excuses. I was leading a goat hunt. Don’t believe that? Fine, I was being a dictator at work and telling everyone what to do. Still no? Okay I was definitely spending all my time thinking about how to solve a word puzzle like the dirty millennial I am.

Okay throw your seashell in the bush and take a jump with me as I lay out all the bad, poor and questionable strategy from the last episode. Spoilers below.

I can get loud too! WHAT THE F***? (AKA funniest quotes/moments of the week)

Oh this one is easy. Fast forward to the mid point of the episode where we find Adam finally discovering the hidden immunity idol. Take a look at the pure joy on Adam’s face. 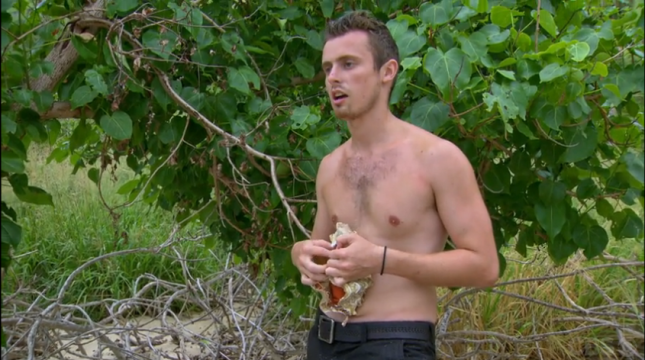 Alas the joy was short lived because a moment later the bubbly Hannah walked down the beach and yelled towards Adam.

Adam looking for a hiding spot

Don’t worry Hannah, people say ‘Oh, no’ when they see me too

Adam sees Hannah through the bushes and thorns. Maybe, just maybe she can’t see what he’s doing through all those plants.

Shit, totally busted. Now that Hannah has caught her prey she can go in for the kill. Adam should be full of fear.

Hannah can end Adam’s game right here. She can take control of Adam and force him into an alliance. She can get in his face and say, “look I know you have the idol and since I know, we have to work together. Let’s do this thing”. She couldn’t have asked for better timing. This is it. This is Hannah’s moment. Go on Hannah. 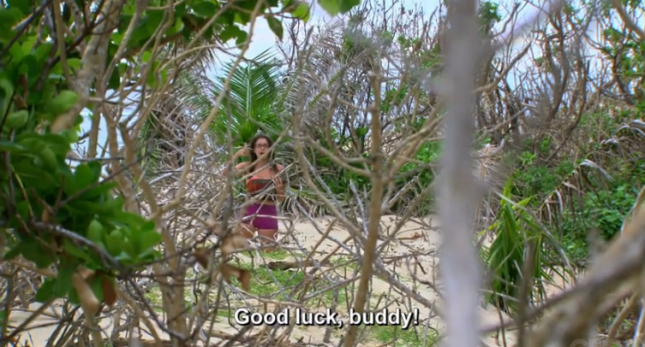 Did she really just walk away?

Yup. Hannah is a character. And she is here to play. Play a character I mean, not the game.

Where to begin? There have been a lot of solid alliances that have broken up post-merge in hysterical fashion in 33 season of Survivor. There’s Timbira who blew a 6-3 advantage in Survivor: Tocantins. There’s Galu who blew a 8-4 advantage in Survivor: Samoa. And there are many, many more. But it’s rare to see a strong alliance completely blow up in the pre-merge game.

Unfortunately that’s what happened to the Gen-X six (the Gen-Six? Too late for that nickname I guess). They had a solid group of logical players. They had two really easy targets because of their challenge weakness (Cece and David) and their paranoia (again David). What could go wrong with this group?

Well they played too hard too early. Which is a theme in this Gen X tribe. You had Jessica gunning for the loud and egocentric leader of their group. Then you had Lucy looking to take control of the game.

I understand hindsight is flawed. But this group should’ve been focused on getting themselves to the next phase of the game (the swap and, if luck would have it, the merge) before going 100 miles per hour.

Okay I managed to avoid mentioning David’s idol play in the previous section. I’m very conflicted about his play. I’m not sure how I feel about it. Except I know I was completely #blindsided by it. I would’ve bet all my money (like $10) on David staying in his seat if you had asked me seconds before he did it. But now that the shock has worn off, was it a good move?

In a vacuum where the only elements to this game is the game itself (the strategic side), no it was not a good move. This would be the equivalent of you realizing you are not going to win at Monopoly so you start gifting your properties to someone so that another player doesn’t win. It’s sabotaging someone else’s game because you literally can’t do anything else other than sit there and lose.

But in the complex game of Survivor where you have to take the social game into play, this might not be the absolute worst move. I still don’t think it’s a good move but I say it has a 10% chance of helping your game and a 100% of making you a memorable character.

David was facing a, maybe, 5% chance of winning this game at that point. So stacking some unlikely odds actually makes sense. Then again, having an idol in your pocket might be more beneficial than saving someone who isn’t really an ally of yours.

On the other hand David might have set himself up for something beautiful if he can get to the end of the game. First, Jessica could be a member of the jury at the end and if David could get himself there then he might be able to win Jessica’s vote because of this move. Second, Jessica has the mysterious Legacy Advantage, a new advantage that can only be opened on day 36 of the game. The other twist is, if Jessica is voted out then she has to leave the advantage with a player in the game. Now that David saved Jessica, who do you think is first in line for that advantage if she gets voted out? In addition to that, had she gone out in this episode, she probably would have given the advantage to Brett or Chris. Of course we can’t give David too much credit because he had no idea about the Legacy Advantage. But he definitely backed into something good. Sure it’s something far into the future at this point but this move could have bought David an advantage and a jury vote.

The answer here is that there is no answer. By all logic and strategic purposes this was probably a poor move. But Survivor is not logical all the time and who knows, maybe this will be the moment that wins David the game.

At this point in the game I wouldn’t count anyone out. Maybe Hannah but only because she isn’t taking the game serious. Then again, did Fabio take the game serious in Survivor: Nicaragua until the very end?

Plus, the swap is happening in the next episode. So literally anything can happen.

Again with the swap happening next it’s really difficult to stick to a plan for each player. But I will say the Millennials should stick to the plan of getting rid of Gen X’ers because they have a tight group and they have the numbers. But Gen X’ers need to jump off the generation war machine and find a way to work with the Millennials. It’s a new phase of the game and the core alliance in that Gen-X tribe is shattered. Just pick up the pieces and work with whoever will have you.

You better relax bro! (AKA who needs to relax…bro)

This wave needs to relax, it played far too aggressively last episode.

It’s time to say goodbye to…uh…damn I should know this. Someone went home last episode right? I’m really struggling here. I’m sure whoever went home had plenty of confessionals and was a fully fleshed out character right? I’m sure they weren’t hidden for the first three episodes and then randomly given the spotlight in their boot episode right? Eh, it’ll come to me I’m sure.