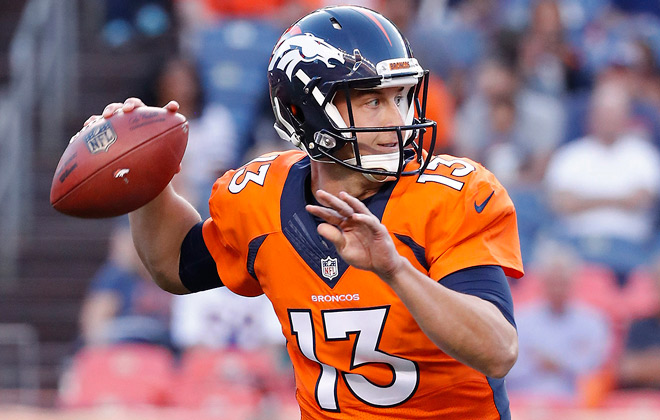 Back in June, I got bored one day and attempted to predict what the makeup of the Broncos’ final 53-man roster would look like. For the most part, my opinions haven’t changed that much since then, but considering tomorrow is the last preseason game and I found myself kind of bored again, I figured it would be a good time to take one more shot at predicting those 53.

This will mainly consist of me offering up my insight with a couple of self-deprecating jokes mixed in, but now we also know that the Broncos are rumored to move on from T.J. Ward. And we have to talk about that too, right?

Hit the jump and we’ll get to it.

With Siemian having locked up the starting job and Vance Joseph declaring earlier that the Broncos will only carry two quarterbacks this season, there aren’t any more questions to be answered here, right? Wrong! Lynch’s shoulder injury on Saturday threw a wrench in everything and no matter how much you like Siemian, it would be asinine to go into the season with just one healthy signal caller, unless you REALLY want to see what Jordan Taylor can do as the emergency option.

So with Chad Kelly likely headed for IR and a redshirt season, that would seem to indicate that Kyle Sloter is going to make the team. He certainly has impressed this preseason and made the most of his opportunity, but there has been some word out of Dove Valley that the Broncos wouldn’t feel comfortable rolling with him for a regular season game. While Sloter is still definitely on track for the practice squad (although I have reservations that he will get there), the third quarterback is potentially someone who isn’t on the roster. John Elway may sign one this week or he may wait until the flurry of cuts take place so that he has a larger pool of players to choose from. Or Sloter may tear apart the Cardinals tomorrow and emphatically shut the door on Elway entertaining the notion of bringing in anyone else.

All I know is that the third quarterback won’t be Colin Kaepernick, and that you can take to the bank. Is that a bit of a cop out on my part? You bet.

It turns out that Charles is still a pretty darn good player when he’s healthy and on the field. Who would’ve thunk it? The real test will be if he can string together multiple games without succumbing to the knee injuries that have plagued him the last couple of years, but for now he has done enough to claim his roster spot. Booker and Henderson round out a group that appears to be much deeper than it was a few months ago, and that will hopefully provide the offense with the balance that it didn’t have last year.

Special teams coach Brock Olivo is on the record saying he wishes he had a whole team of Janovich’s. Vance Joseph also praised his fullback, basically saying that Janovich makes it worth carrying one when a lot of other teams don’t. With all the love that he’s getting, you’d think the other players might start to get jealous, but that’s just another chapter in the Myth of Janovich.

I’ll be honest with you, I have no idea why Bennie Fowler is making this team. It may seem like I pick on him a lot, but I can’t think of one notable thing that he’s done this preseason. Having not watched the games all the way through, I’ll assume that I missed something spectacular that makes carrying him worthwhile. Beyond that, the Broncos were always going to carry six receivers and Carlos Henderson’s injury opened up a spot for Jordan Taylor, who has developed fairly good chemistry with Siemian. Sometimes these things just work out the way they are supposed to.

Remember my hot take back in June that Virgil wasn’t making this team? Well, I’ll take my plate of crow with a side of fries and ranch, thank you. Jake Butt’s continued recovery made it all but certain that Virgil would keep his spot, but the scary thing is that he has easily looked like the most competent tight end on the roster. Yes, Virgil Green, with his whopping 57 career receptions and 3 touchdowns, is hands down the best tight end the Broncos have. This is definitely one of the positions that Elway will attempt to improve after final cuts.

This is another one. I don’t feel good at all about keeping Sambrailo around, but my guess is the Broncos like his versatility enough to give him one last shot on their roster… until they find someone they like more on the waiver wire and bounce him out of town. Regardless, I don’t see them rolling with fewer than nine big guys up front.

Despite being hammered by injuries for all of training camp, the defensive line has mostly dodged any major bullets outside of losing Billy Winn for the season, so my initial projection remains largely the same. The only surprise here is the emergence of Shelby Harris and the absence of DeMarcus Walker. Hang on, we’re getting to that.

I’m not sure that he’ll be listed on the roster this way, but Walker will definitely be playing mostly at outside linebacker until Shane and Shaq return to the lineup. Walker and Edebali are going to be thrown into the fire early on and so the pass rush may sag, but when you are lucky enough to have no. 58 on your roster, things are always going to be looking pretty good at this position.

Are you surprised that the Broncos are bringing back the same middle linebackers that they had last year? You shouldn’t be. They didn’t make any notable additions to this group in the offseason and Joseph has gone to great lengths to talk up both Davis and Nelson.

At this point I’m trying to think of a good reason why I kept Sambrailo over Chris Lewis-Harris. Um, Lewis-Harris’s name is rather close to Chris Harris and that would just be too confusing? Elway is too stubborn to admit that a journeyman is more valuable to the team than his second-round pick from 2015? Or is it the fact that I don’t want my projections to be almost IDENTICAL to Tim Lynch’s from Mile High Report? Yeah, let’s go with that third one.

Ah yes, at last we have arrived. On the surface, the Broncos moving on from T.J. Ward would be pretty damn surprising. After all, he’s been a key cog of the No Fly Zone for the past few years, is coming off a very productive season and his teammates love him. Then you look at it a bit more closely and you start to understand why the Broncos would want to do that. He’s in the last year of his contract and won’t impact the team’s payroll beyond 2017, his flaws in coverage severely hamper his game and Simmons is an increasingly promising young player that the team would like to get in the lineup sooner rather than later.

This was probably always the plan once the Broncos drafted Simmons and resigned Stewart, even if it gets pushed ahead of Ward’s contract expiring. And while it wouldn’t surprise me if the trade rumors were all fluff and Ward is starting on Denver’s D for the season opener against the Los Angeles Chargers, those rumors usually only come up this time of year if a player is about to get cut. If it can happen to Joe Haden, it can definitely happen to T.J.

Again, no surprises here. Now I wonder when McManus is going to get that big contract extension? If he does, I’m definitely getting my buddy Michael McManus his jersey.

So that does it. Enjoy the potential drama of the next few days and worry not, friends. The regular season is almost here!