Hello and welcome back to our coverage of Survivor: Triple H!

Yes this is the place to come find out who the “Winners” and the “Losers” are of each episode. I’ll even throw in some “Hot Takes” to keep your interest.

Take the jump and find out what my Winners, Losers and Hot Takes are of the first episode of Survivor 35. Plus some crazy eyes. Okay, lots of crazy eyes. Spoilers below.

Alan Ball Oh boy, in the preseason Alan promised gameplay that has never been seen before and did he ever deliver. He started off strong, making an alliance of four with Cowboy Ben, Lifeguard Ashley, and dead eyes JP. He even had a core two with Cowboy Ben. But then Alan saw something happen between Ashley and JP. Or thought he saw something. Or wanted to see something. I’m still not sure.

This led to Alan confronting JP and, well, forcing him to do a strip down, near cavity search to show that he was not hiding the idol. Entertaining? Yes. Solid gameplay? Unlikely.

In Alan’s defense I was playing a game called Deception the other day. It’s a board game where one player is intentionally, you guessed it, deceiving people. And it’s your job to figure out who. During the third round I was 100% convinced the deceptor was my brother-in-law. I’m pretty sure I even had those crazy eyes Alan had. And I most definitely said something a la Alan, “I’m not crazy, I’m confident.” Turns out, I was wrong. Dead wrong. And that feeling sucked so I have empathy for you Alan.

Idol Hunts In this episode we witnessed two blowups over idol searches. The aforementioned TSA esque strip search of dead eyed JP and the aggressive cornering that Joe Mena did to Dr. Mike Zahalsky. Both were extremely intense confrontations. The former ended with a naked man and the latter ended with some possible bullying.

For this reason I wonder if idol hunting is a strategy that might be best to ignore if you are playing the game. We are in the big moves era of Survivor where everyone feels pressure to have some sort of advantage and it’s gotten a bit out of control. There’s a great adage in the investment world about the shoeshine boy. The basic premise is that when a shoeshine boy, or someone who is not a subject matter expert in investing, is trying to give you stock advice, it’s best to ignore that advice and do the exact opposite of what he says. The idea is that the advice is old news at that point and you shouldn’t follow the crowd. Maybe we are at that point in Survivor with idols. Maybe a strong strategy is to create paranoia over idols while avoiding having anything to do with them. Kind of like in Survivor Blood vs Water when they all burned the clue to the hidden idols. Sometimes it’s best to go against the crowd.

First One Out Edit I feel great about this season after episode one. But I am a bit dismayed that we heard so little about Katrina Radke, the first one out. This premiere was shorter than most premieres so I understand they were crunched for time. But everything I know about Katrina I know from preseason press and not everyone follows that stuff. It just felt odd to see someone we barely knew get her torch snuffed.

The Super Idol Twist Okay so the Super Idol didn’t get played but hear me out. It was entertaining to have the possibility of a Super Idol play without it actually getting played. And now it’s void and null but still in the game (possibly to be used as a fake idol). That’s the best possible scenario. We got to see Ryan strategically use the idol to his advantage by building a bond with Devon and there’s a chance that it will help him down the line if Chrissy and him have the chance to play with each other. It was good entertainment, and no one got booted because of it, so no harm, no foul.

Healers Well damn the Healers really out heroed the Heroes and out hustled the Hustlers with a dominating premiere. This tribe seems peaceful, strong, and full of players. The only negative aspect is the war brewing between Joe and Mike but if they keep up their domination they might not have to worry about that for a long time.

Cowboy Ben As Rodney from Worlds Apart might say, Cowboy Ben is cool, calm and collective. He made an instant bond with Alan “Crazy Eyes” Ball, the cool couple Ashley and JP like him and it looks like Chrissy trusts him too if the preview is to be believed. Besides that he was seemingly in control of this group and was able to steer them into an unanimous vote out of Katrina. Well played, Cowboy Ben is going to be around for a long time folks.

Chrissy not playing the idol was the right move. Okay this might not be the hottest take but some people are still confused about her decision to not use her super idol on her fellow mom Katrina. From exit interviews it sounds like Chrissy and Katrina weren’t close. So if you are Chrissy and you see these younger people are going for one of the mom squads isn’t it best to jump on their side in that decision? Just cut Katrina off and don’t create a big target on your back. She knows that Ashley and JP are seen as a power couple so she can leverage that fear if she finds herself back in the hot seat. Or she can use her super idol as a fake idol at that point. She has a lot of cards to play and I think she made a wise decision to not drag Katrina back into the game with people who don’t want to play with her.

13 minutes into the season and we get our first crazy eyes when Alan is first talking about how he is onto Ashley and JP’s secret…whatever it is.

We then got some night vision crazy eyes when JP was promising he didn’t have an idol.

And again right before JP strips down, the cameramen zoom in on the cray eyes.

And then in tribal council we got a few gems.

Oh whoops, those are his sexy eyes. My bad. Here we go. Back to normal. 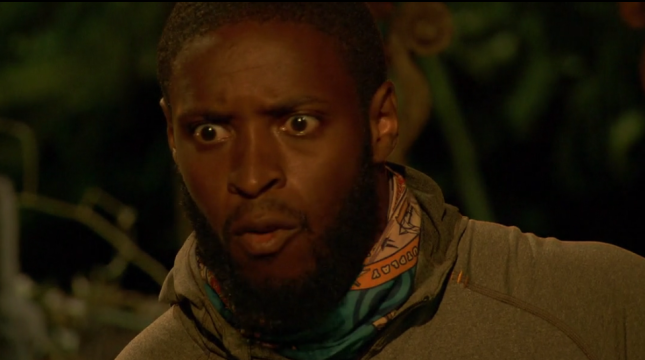 “Guys I swear, these are confident eyes.” 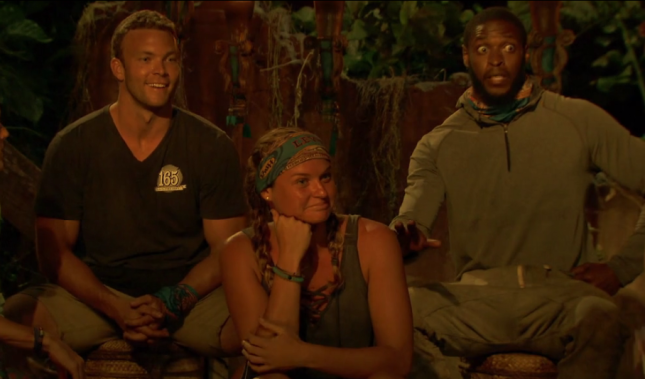 Until next time, I got nothing for ya. Head out.