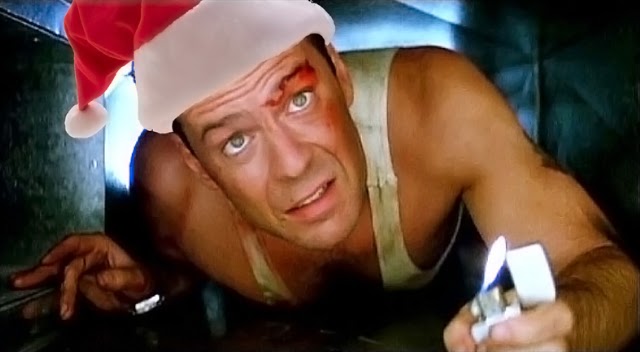 There’s been a lot of debate regarding the classification of Die Hard as a Christmas movie. John McTiernan’s 1988 action smash-hit is an iconic film, but is it a holly jolly one? Does it belong on your watchlist during the holiday season? Or should it be far removed from more family friendly entertainment that doesn’t feature gunfights, drugs and yippie ki-yay, mothe… well, you know the rest.

That’s a question that people have been asking for 30 years now, and there are plenty of articles out there that try to answer it. My purpose here is to instead list all the qualities that a Christmas movie should have, and if it turns out that Die Hard possesses all of them? Well, then I guess you are allowed to put it on after It’s a Wonderful Life.

1. Our hero should be estranged from their family at the start of the film, or there at least needs to be some tension.

In order to make our happy ending feel earned, our protagonist must begin in a place far removed from their spouse, children and loved ones. Whether it’s George Bailey contemplating suicide or Kevin McCallister wishing that his family would disappear, the separation is essential if the filmmakers don’t want the audience rolling their eyes at all the inevitable feel good moments that are on the way. In the case of John McClane, he flies out to Los Angeles to try and make amends with his wife, Holly, only to discover that she has begun using her maiden name again. Not a good sign early on for our hero, but Die Hard checks one item off of the list.

2. The story must take place during Christmas time.

This one goes without saying, but it is the difference between a holiday classic and a heartfelt drama or a gutbusting laugher. Miracle on 34th Street takes us all the way from Thanksgiving to Christmas Day. While Die Hard may be devoid of any snow, Christmas Eve is the same day in Los Angeles as it is in New York, so that’s two checks in a row.

3. The hero must undergo a fundamental change in character

In fairness, this is a requirement for any movie that wishes to feature compelling characters and a worthwhile story, but it’s especially true of the Christmas variety. How else would it be the most wonderful time of the year if it didn’t bring out the best in people? Would Hollywood keep remaking A Christmas Carol if Mr. Scrooge chose money over helping Tiny Tim? Probably not. So while John McClane may be a wisecracking bad ass from beginning to end, he does admit that he was an asshole to his wife and feels a great deal of remorse.

That’s about as much of a change as you can ask for in an 80’s action flick. Let’s give Die Hard the hat trick.

4. No confidant, no Christmas movie

If our hero is to make it home for the holidays, they’ll require the aid of a trusty sidekick to bring out all those noble characteristics. Do you think Max really wanted to help the Grinch steal Christmas? Of course not, but he does because he’s a dog and the Grinch is his master, and he can’t be a good dog if he’s disobedient. However, as soon as the Grinch’s heart grows and he decides to return everything that he stole, no one is happier than Max. Again, he is a dog and maybe the hungry pooch was just salivating over that Christmas feast.

The point is that all Christmas movies require a companion you can count on, and who is more handy in a pinch than Sgt. Al Powell? Not only is he McClane’s lone ally among the cops who arrive on the scene, but Powell even fires his gun to save our hero’s life. Is this a fairly cliche action trope? You bet, and yet it doesn’t change the fact that Powell remains a true friend to the end. Die Hard is on a roll you guys.

5. That early tension must subside en route to a reconciliation between our hero and loved ones

We’ve touched on this a bit already, but no self-respecting Christmas movie has an unhappy ending. If you make your audience depressed during the holidays, then you don’t belong in this category. Do you think Ralphie could’ve handled dressing like a deranged Easter Bunny or watching dogs eat his Christmas turkey if his parents didn’t relent and give him that air rifle? Of course not. He would’ve cried himself to sleep and TBS certainly wouldn’t play it for 24 hours straight every year.

When Holly introduces herself as “Holly McClane” at the end of the film, we know that John has won his wife and family back. I’m sure he didn’t imagine having to go to such great lengths to achieve that outcome, but it counts nonetheless. Die Hard is sounding an awful lot like a Christmas movie…

Ah, well Die Hard was close you guys. If it’s not appropriate for your kids to enjoy, then it probably falls just a little short of being a true Christmas movie. What’s interesting about that is that there are plenty of family-friendly holiday classics that probably bore children to tears. Count me among the ones who dreaded annual viewings of It’s a Wonderful Life during my youth. Like any other genre of film, Christmas movies evolve and change for us as we get older, so of course now I’m the one who instigates those yearly viewings.

Regardless, even a bad film critic like myself can’t recommend that you swap out something your kids think is boring for Die Hard. However, if you don’t have kids or prefer to watch it by yourself, then go nuts. Put on your favorite ugly holiday sweater, pour a glass of eggnog and watch John McClane take on a group of terrorists in the name of togetherness and spending Christmas with his love.

I feel all warm and toasty on the inside already.

4 thoughts on “What Makes a Christmas Movie?”