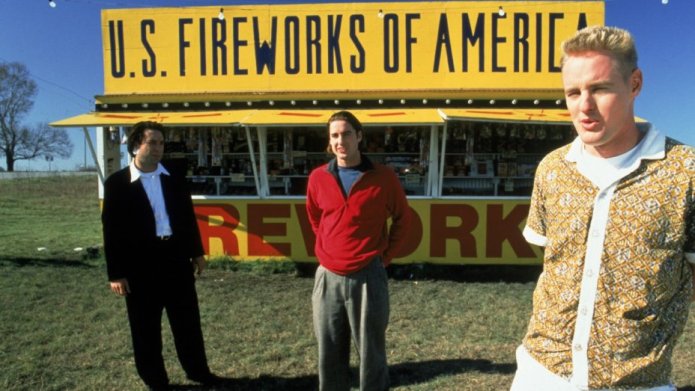 I was never much of a Wes Anderson fan growing up.

Perhaps I was too young or too impatient to understand his style of filmmaking. I remember watching The Royal Tenenbaums when it came out and, other than the scene when Danny Glover falls into a ditch as he’s walking alongside Anjelica Houston, I didn’t laugh once. There were excerpts of critics praising that movie all over the case of the DVD, so what was I missing?

It wasn’t until it was screened for us during my senior year of high school that it finally clicked for me. I guess you have to experience your own period of growing pains filled with awkward moments before you can grasp that absurd and ironic sense of humor. Or maybe that was exclusive to me. Whatever the reason that it took me so long, I’ve been a fan of his ever since.

I’m also a fan of collecting movies. The guest bedroom in my apartment has shelves packed full of blu-ray discs, which is a testament to my fiance’s patience to put up with that sort of thing and a perfect example of why nowadays most people opt for streaming: storing that many movies is a big pain in the ass. For me, it’s more of a labor of love and when I found out that Anderson has gradually been remastering all of his feature films and releasing them on blu-ray through the Criterion Collection, I knew that I had to have them.

Which brings me here. If you’re going to buy all of these films, watch them and try to turn it into a series for your blog, you have to start at the beginning.

Bottle Rocket isn’t all that different from your standard coming-of-age story: three friends trying to find their way in the world decide to set off on the road together in hopes of making it big. Of course, in this case making it big involves pulling off several heists en route to starting a 75-year plan, which was all meticulously crafted by the leader of the trio, Dignan. While the other two would probably be content with selling pot or meeting girls (you know, normal carefree guy stuff), Dignan will not be satisfied until the three make a name for themselves and earn a little respect from Mr. Henry, his crime boss idol.

I’ve seen Owen Wilson play the same character in so many films that I often struggle to see past him. If that slightly crooked nose and jovial personality pops onto my screen, I have to resist assigning his character traits to him before he gets a chance to act any of them out. Generally, this is a guy who is confident, witty, perhaps a little shallow and whose priorities are a little out of whack, but ultimately proves his worth by the end.

Wilson’s Dignan is not any of these things. His sole focus is on becoming a notorious thief. He buys the biggest gun he can find and even comes up with his own catchphrase before each heist: “Let’s get lucky!” One could misconstrue this as a stringent discipline for his craft, but in actuality it’s probably the first time in his life that he’s felt a sense of belonging. And while Dignan sees this as his calling, he of course is not cut out at all to be in this line of work.

Of course, the other guys aren’t either. The fact that they are even attempting this to begin with is preposterous, and likely where you see signs of that trademark Wes Anderson absurd comedy, who like any other debuting filmmaker was still developing his voice and style. Take a little theft, mix it with some quirky dialogue and deadpan deliveries, and you have your first Wes Anderson movie.

Making your first film is undoubtedly an arduous challenge, and I think Anderson is to be commended for making something off-brand. That he continued exploring his unique style even after the film flopped is even more impressive, and I wish that Wilson had followed suit.

On the other hand, maybe he simply clung to the old adage that the character he played never seemed to grasp: it truly is enough to just be yourself.

(For you collectors out there, the Criterion Edition comes with a little copy of Dignan’s 75-year plan. Now if Kevin and I ever decide we want to become robbers, we have a strict set of guidelines not to follow)