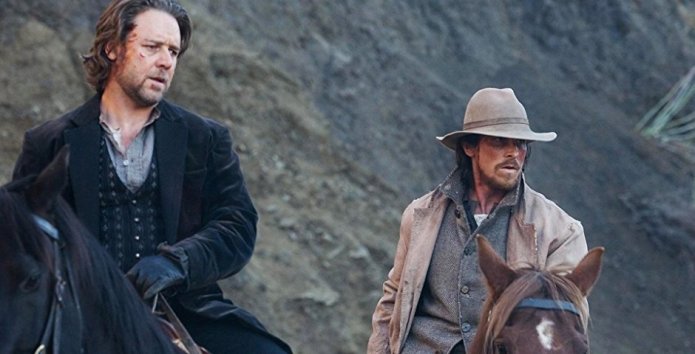 I spent last Christmas in Arizona with my fiance and her family. On Christmas Eve, her parents suggested that we venture down to Tombstone because I had never been there before and they knew that I was a fan of that Western. Pretty good family to marry into, right?

On the way, we passed the turnoff to Bisbee and I excitedly pointed out, “Bisbee?! That’s the first town they went to in 3:10 to Yuma!” My fiance laughed, rolled her eyes a little and said, “I love how you know where places are solely because of movies you watch.” She’s not wrong, but it’s simply the catch that comes with being engaged to a film lover. To her credit, she always takes it in stride and even sits through movies that I want to review and that she could care less about because she wants to be supportive. That’s true love folks, and another example of how lucky I am and that I made the right decision by proposing.

But while I could talk about my wonderful fiance from dawn til dusk, the point is that I will forever associate Bisbee with 3:10 to Yuma, the 2007 remake of the 1957 film of the same name. And when I’m reminded of that movie, I instantly recall the clever direction, expert pacing and superb acting. I then find myself yearning to experience it all over again, and that’s the mark of a tremendous motion picture: one that you can revisit repeatedly without tiring of it or being able to spot any flaws.

I’ve certainly never been able to find any, friends, and that’s why I declare that 3:10 to Yuma is a perfect film and one of the finest Westerns ever made.

One of the best sequences of the two-hour runtime is also one of the most unheralded ones: the prisoner transport of Dan Evans, Grayson Butterfield, Doc Potter and Evans’ son William pass through a construction camp full of Chinese laborers, in order to recapture outlaw Ben Wade (Russell Crowe). Ash from exploding dynamite floats through the air along with a feeling of general despair from the laborers, which makes the camp look like the Gates of Hell. As William matches eyes with the poor souls forced to work for the white man’s gain, it’s as if he’s understanding the way of the world for the first time. It’s also the point in the story where William’s resentment for his father starts to fade, which is typically the case for teenagers who loathe their parents. When they finally experience a bit of the real world for themselves, they realize they were too quick to judge and maybe should’ve given their old man a break.

I love how understated that scene is, but even more so how Dan doesn’t make a big deal out of it when his son finally starts to come around. Dan tolerates William’s disdain for him because he’s more ashamed of his family’s predicament than anyone. He’s ashamed that he can’t keep them happy and well-fed, ashamed that their landlord intends to sell their ranch out from under them and ashamed that he hasn’t been a more inspirational role model for his sons. This tension is established from the opening of the film and is only heightened when it becomes intertwined with Wade’s escort to Contention, where he will supposedly take the 3:10 train to Yuma prison and finally meet his comeuppance at the hangman’s noose. Of course, Wade has already escaped from that prison twice and seemingly only goes along with the transport for his own amusement.

Casting Russell Crowe as the near mythical outlaw was a shrewd move, as the veteran actor made his American film debut in a Western (1995’s The Quick and the Dead), but also played a cop in L.A. Confidential (1997) and American Gangster (2007). He’s a perfect fit for an eloquent, philosophical killer who understands lawmen and what makes them tick. You get the sense that Wade robs from the railroad and murders Pinkertons because he excels at it and makes quite a good living from money he steals, but he doesn’t see it as anything more than an occupation. Wade quotes from the bible, sketches scenery that moves him and is constantly trying to engage people in conversations about human nature. That’s why it piques his interest when a one-legged war veteran turned rancher volunteers to join the prisoner escort, even if it means that Dan will have to temporarily abandon his struggling family to do it.

To the script’s credit, Evans isn’t just the decent man that you’d expect him to be. While never overly bitter, he is frustrated by the hypocrisy of authority figures in the lawless land where he resides. Marshals and railroad executives preach about law and order and doing things by the book, but as soon as a situation begins to threaten their well-being or livelihood, they tuck tail and run. Meanwhile, Evans tries to make an honest living and is always left picking up the pieces. Christian Bale took this role between gigs as the titular character in Batman Begins (2005) and The Dark Knight (2008), and I believe it helped him convey a deeper understanding of morality here. Dan’s complexity also explains why Wade begins to recognize him as an equal. The two trade musings on life as the caravan attempts to elude Wade’s gang, vengeful Indians and racist posses on the way to Contention. Evans can’t match Wade’s ruthlessness or physical prowess, but he may be the first person the outlaw has ever met with a deeper understanding of self-preservation. In a world rife with morale imbalance, the only true justice is that which you take for yourself.

3:10 to Yuma features shootouts, gorgeous scenery and confrontations between good and evil, so it has all of the typical Western staples covered. However, if you removed the relationship between Wade and Evans, you would rob the film of its intricacies and it would cease to be a great entry of its genre. You would also lose unique characters like Charlie Prince, Wade’s right-hand man played by the criminally underrated Ben Foster. I opted for an easy pun there, but there is nothing easy about fully realizing Prince’s character like Foster did. Sure, Charlie is deadly, clever and completely unrelenting when it comes to supporting Wade as the leader of the gang. Then you get the sense that Charlie likely idolized Wade from an early age, like William does now, and that his devotion to his “boss” might have more to it than just being a good sidekick. Would you truly follow someone anywhere, anytime if you weren’t in love with them? Foster is joined in the supporting category by the great Peter Fonda, perfectly cast as the rigid Pinkterton agent McElroy, and Logan Lerman, who brought enough maturity to William so that he was actually relatable with his insubordination and not just another whiny teenager.

I would be remiss if I didn’t praise the maestro behind the whole project, director James Mangold. I’ve always found that Mangold provides a particularly deft and steady presence behind the camera, and that he specializes in stories featuring well-meaning protagonists that struggle to let go of their inner demons. That’s one reason why Walk the Line (2005) was such a resounding success and why two of the best X-Men films had Mangold at the helm: The Wolverine (2013) and its follow-up Logan (2017). He gives his actors the space and freedom to find depth in their characters, so even if they take actions that we don’t agree with, we’re always understanding. Mangold also utilizes a lot of practical effects and old-school stuntwork that makes the audience feel that they’re right in the thick of the action. You can practically smell the gunpowder as Wade’s gang chases him and Evans through Contention. Marco Beltrami’s score always adds urgency to these scenes and a nostalgic Western overture to the whole picture.

I’ve never seen the 1957 version of the film before. I think it would be hard for me to judge it in an objective manner and not compare and contrast it with the remake. But hypothetically speaking, let’s say that one of these days I decide to give it a chance. Regardless of how good or bad I find it to be, I don’t think it would be the first thing to come to mind the next time someone mentions Bisbee.

No, instead I’ll picture the scene when Evans and Wade are holed up in a hotel room in Contention. Evans waits anxiously for Wade’s gang to close in, as if his whole life has led him to this final stand, and Wade just sits there bemusedly drawing his captor and trying to figure out why this rancher is the only one still trying to get him to the train.