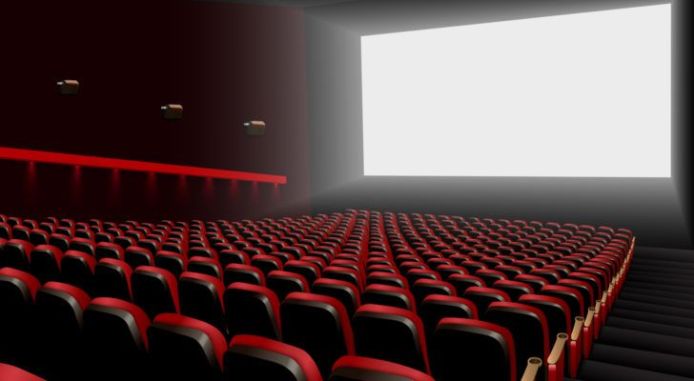 Kevin: Jesse, a good chunk of our friendship has revolved around hanging out at places that serve to be distractions, that is, entertaining distractions. We probably didn’t speak a word to each other, outside of hushed voices, in person from the years 2008-2013 because we would only hang out at the movie theater. Sometimes I wonder if we were forced to speak with each other away from a dark, quiet room if we would straight-up hate each other and not get along.

Okay, probably not, our friendship has survived my move to the east coast so I imagine if we truly hated each other, we wouldn’t text every day. Nevertheless going to the movies with friends is a rite of passage for us American folk. Typically the cinema is one of the first places preteens and teens gather to socialize away from their parents. It’s where first dates happen and birthday parties are held where inside jokes and memories are formed.

Just off the top of my head I have numerous significant memories at the theaters. I remember my father taking me to The Phantom Menace hoping I would get the Star Wars bug (I did). I remember begging my parents to let me invite two of my friends to see Kung Pow: Enter the Fist for my 12th birthday (you’re welcome Eric Brown and Jeffrey Whatever-your-last-name-was). I remember sneaking into The Hangover with my eventual wife because we were waiting for Up to start next door, and I remember regretting leaving the former for the latter. I remember watching the first Avengers with you and a handful of our friends, blown away at the culmination of five years worth of movies (ha, so naive).

Since my movie theater experience growing up was always a social activity, I saw my theater attendance drop as I graduated college and moved away from my family and friends. But now, as I approach my thirties, I have found myself in a movie theater renaissance. I have discovered the magic of going to a movie theater alone where I can take up extra room, not worry about if my friends are enjoying the experience and I can arrive whenever I want. In the past year I’ve experimented with Moviepass, which allowed me to see a few gems but mostly just stole my money and I’ve memorized the discounted days at different chains. Overall I’ve paid, probably, way too much money to sit in a dark room with a giant screen for movies I loved, movies I hated and movies that made me say, “what the fuck?”.

It’s been a great ride for me, I’ve rediscovered the benefits of a theater, mostly that it allows me to actually focus on the movie instead of get distracted by my phone or the dishes that need to be done.

I bring all this up because you recently wrote about how you paid roughly $200 (might be an exaggeration) to stream a movie instead of support your local theater. What do you have to say for yourself? And how would you explain yourself to 22-year-old Jesse?

Jesse: The funny thing is that streaming instead of supporting became a trend when I was around the age of 22. I’d probably just tell myself, “Hey man, that new thing you discovered? It ain’t going away anytime soon… also, you’ll meet the love of your life in about five years, so you can save all that money you were going to spend on other girls.”

Fair or not, I partially blame you for the decline of my theater attendance. None of our friends in Denver go to the movies anymore, save for our buddy Michael McManus, who is free once every two months (you have a good reason, Michael, I’m just making a point). If you hadn’t moved to the other side of the country, I’d undoubtedly be going more often. But it’s not all your fault Kevin. The truth is I’m reluctant to fork over the money for anything other than a Marvel or Star Wars movie. Does that make me cheap? Am I lazy for not taking a page out of your book and seeking out the discount theaters? Probably a little of both.

So go ahead man. Tell me how crazy I am to co-manage a film blog with you and not watch more movies the way they were meant to be seen.

Kevin: In your defense you do spend the majority of your budget on purchasing things called ‘DVDs’. Which I guess is some sort of physical disc that you can use to magically watch movies? So you get a pass.

You also get a pass because it is actually kind of ridiculous to go to a movie theater these days. It’s expensive unless you do your diligence and aim for discounts. For the price of one movie you can subscribe to Netflix or Hulu or Disney Takes Over the World (I think that’s the name of their new service right?) or any of the seemingly endless streaming options. Plus when you get to the movies they gouge you for a bucket of butter (with some popcorn thrown in). And on top of that they make you sit through OVER 20 minutes of previews. I get annoyed at a five second ad before a YouTube video, how do I handle 20 minutes of ads for movies I probably have little desire to see?

Besides that, I live in NYC now which means everyone claps at the end of every movie. Apparently that’s a thing here. I’ve been to five or six movies of all different genre types and the only similarity they shared was people clapping at the end. This confounds me Jesse, confounds! I’ve never seen you clap at the end of a movie so you’re with me on this right?

Jesse: I’m totally with you. It’s one of those weird things that people do because they want to acknowledge how they’re feeling, even though the actors and filmmakers aren’t there to hear them. You see a similar reaction from sports fans who yell at their team as they watch the game on TV. Of course, I am guilty of the latter, so what do I know? I would assume that New Yorkers always clap because as with all things, they are a little more vocal about expressing their opinions.

And maybe that’s part of the appeal of going to the theater. You visit or move to a new city and want to take in something familiar, but view it in a different light. If a crowd is respectful, they can elevate and alter the movie going experience in a way that can’t be replicated at home.

So what say you Kevin? Have the New York theaters given you a new experience, or do you just wish they would stop applauding?

Kevin: First of all, clapping at the TV for a sports game is something different, there’s randomness involved in the live spectacle for a non-scripted sports event (sorry WWE), anything can happen and the story is literally unfolding before you so it makes sense to get caught up in the spectacle. But with movies everything is scripted so I don’t feel the need to cheer because every moment is intentional and planned out. Even if the filmmakers plan it out so you do cheer just feels inorganic.

But to me there is something special about going to the theater no matter where I’m at. For you the something special experience is still buying physical copies. Neither of us can explain it but it’s probably due to a combination of nostalgia and other strange psychological factors (our mutual friend Michael likens my enjoyment of the theater to the theory that we secretly desire to be back in our mother’s womb, Michael is a weird dude).

The New York theaters have only validated by enjoyment. I’ve gone to a movie here because the humidity in July was too much to handle and I needed to be in a cool room for a couple of hours. I’ve gone to escape the endless crowds only to learn that the same endless crowds end up filling entire theaters for nearly every showing. I’ve made new friends and we met up for a movie. I’ve made small talk with other movie goers who enjoy going alone. I’ve heard clapping, screams, and laughter. I even witnessed someone stand up and tell a person they’re an asshole for eating their popcorn too loudly.

The New York theater experience is just like the rest of New York, it’s typically loud, dirty, and crowded and it often ends with a great story to tell later. But as unique as it is I find myself coming back not because it’s new but because it’s familiar. And it offers what every theater in my life has offered, an escape from the outside world and into one full of endless possibilities.