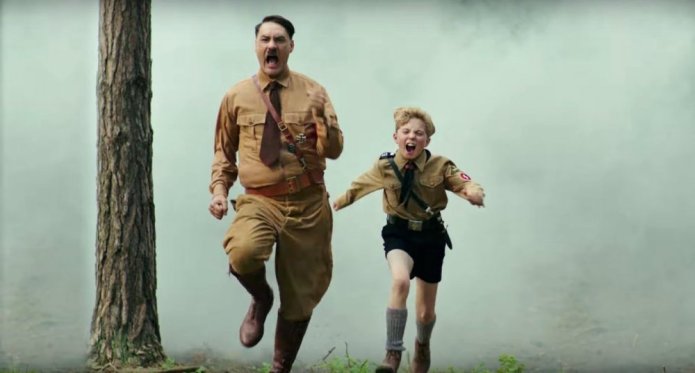 Taika Waititi is a name you should know by now. If he didn’t win you over with What We Do in the Shadows, Hunt for the Wilderpeople and Thor: Ragnarok, surely Jojo Rabbit is the one that will make you want to hop on the bandwagon. And if you’re a fellow cinephile and the man still hasn’t earned your respect, I’m not really sure what else he has to do. His work over the past decade speaks for itself, and my word does Jojo Rabbit have a lot to say.

One reason why I prefer to go into a film as blind as possible (try and avoid trailers, don’t read reviews, etc.) is that it eliminates any preconceived notions that our minds tend to create. That way the story and performances present themselves as they truly are and I can form my own opinion. So when I heard that Waititi was making a black comedy about a young boy trying to prove his worth in the Hitler Youth (complete with Hitler as his imaginary friend), I was sold. I didn’t need to see or read anything else before watching the movie, because based on Waititi’s track record I fully expected he would deliver the goods.

Plenty of humor? Check. Absurd portrayals of Hitler and his Nazis? Check. A likable young hero that comes of age with the love and support of those older than him? Check and check. Tender moments that wallop you right in the feels, alongside poignantly voiced opinions regarding the pitfalls of bigotry and hate… wait, I’m sorry, what? That last bit caught me a bit by surprise. Waititi had already established himself as a reliably entertaining and amusing voice in cinema, but here he proves that he can educate us with those same elements. He doesn’t want us to forget this ugly period of history, lest we see it repeating itself in the modern day world. I’m sure there’s a lot of people out there other than myself that can relate to that.

Of course, none of this works if you have the wrong actor playing young Jojo. I have a feeling that Roman Griffin Davis is another name we’re all about to become familiar with. His Jojo is a very enthusiastic member of the Hitler Youth. The propaganda he’s been fed his entire life has him convinced that becoming a Nazi and upholding all of the ideals of the party is the best life that a little boy can hope for, and so he pursues that goal with relentless zeal and vigor. The Jewish Waititi turns in a wonderful and ironic performance as the imaginary Hitler, cheering Jojo along to become the best Nazi he can be. As expected, the boy’s pursuit comes to clash with both his true nature and the not so little secret that his mother is hiding a Jewish girl in their house.

The perspective of the film is extraordinarily unique. Yes, a child who has been brainwashed by fascism is going to perceive his country in a much different way than the rest of the world, but Waititi ensures that this perception is still childlike in nature: Nazi officers are dashing and brave, Hitler can (and should) be your best friend and Jews are dangerous monsters to be feared and avoided. It’s the type of satire that the Monty Python boys would’ve strived for in the same position, and it results in some rather thought-provoking exchanges. When Jojo encounters Stephen Merchant’s Gestapo Agent, Merchant towers over him and compliments his admiration of Hitler: “I wish more of our young boys had your blind fanaticism.” Or when Jojo is confiding in his friend Yorkie about the Jew in his house. “I saw some (Jews) that they caught hiding in the forest last month,” Yorki says. “Personally, I didn’t see what all the fuss was about. They’re not at all scary and seemed kind of normal.”

The propaganda machine is telling Jojo one thing, while he begins to see the world and his own beliefs for what they really are. When those moments of childhood innocence are abruptly halted by real life horrors, that’s where the lessons begin and where Jojo Rabbit becomes more than just another fun time at the movies with Taika. Veteran actors Scarlett Johansson and Sam Rockwell are strategically cast as Jojo’s mother and Hitler Youth Captain. They have the chops to be light and breezy when the situation calls for it, but also come through in some of the more dramatic elements of the film.

That tonal balance is a tricky line to walk and is my only real critique of the film. When the narrative is coasting rather comfortably through satire, then suddenly veers off into a very real and tense moment, that shift becomes a little jarring and at times it feels like you’re watching two different movies. On the other hand, growing up as a kid in Nazi Germany was probably chalked full of jarring shifts, so perhaps I’m being too nit-picky. I do reject the idea from critics that this subject matter is taboo and shouldn’t be poked fun at. What better way to truly see how dangerous and ridiculous this ideology was?

In case you’re wondering, there is still time to hop on the Waititi bandwagon. It’s getting a little crowded and a few people will have to scooch together, but we’ll make room.