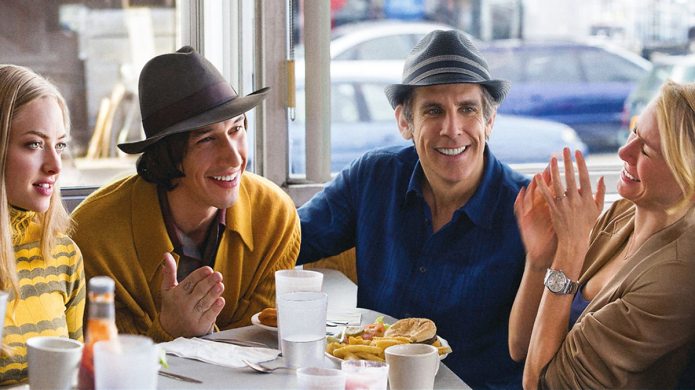 Noah Baumbach’s While We’re Young is a film that stars Ben Stiller and Naomi Watts as Josh and Cornelia, a married couple of a certain age (mid-40s) finding new friends in Jamie and Darby (Adam Driver and Amanda Seyfried) a hipster couple of a jealous-inducing age (mid-20s).

While seemingly Baumbach’s version of This Is 40, full of his trademark witty dialogue and focus on relationships, this film is less about the relate-able theme of aging and more a nihilistic observation of the phonies of New York City and their inevitable successes.

Of course Jamie’s lack of ethics does not immediately come across to Josh who enjoys the energy and the praise that Jamie brings into his life. In fact Jamie revitalizes Josh and he returns the favor by agreeing to share his resources for a documentary that Jamie is filming.

It’s only much later than Josh realizes Jamie was using him to advance his career and get closer to his successful filmmaker father-in-law. He starts seeing Jaime for what he really is, he quips to his wife that “It’s like… he once saw a sincere person and he’s been imitating him ever since”.

As Josh follows the breadcrumbs to reveal that Jamie has been lying about the documentary he filmed he also discovers that nobody cares. Jamie’s lying and scheming is chalked up to his youth and his ambition and his sins forgiven for the same reasons.

As the themes of old versus young and honesty versus deception bubble up it’s easy to assume the film is suggesting that youth, for all its ambitions  and energy, is used to deceive people. Or that young people can do whatever they want as long as they are following their dreams. But there’s more to it than that. The film has an additional narrative that focuses on Josh and Cornelia’s older friends Marina and Fletcher who just had a baby and have been openly celebrating their exuberance for parenthood. As the film progresses their lives are used as another example of a couple that is living a fulfilling life in contrast to Josh and Cornelia. They’re accepting age with grace and they revel in the mundane parenting experience. This puts Josh and Cornelia in between two drastically different lifestyles that appear fulfilling for the parties involved while they struggle to find fulfillment in their lives.

Of course much like the reveal of Jamie’s dishonesty and Darby’s reveal of their unstable relationship, we find out that Fletcher and Marina are struggling too, “Before you have a kid, everyone tells you, ‘It’s the best thing you’ll ever do.’ And as soon as you get the baby back from the hospital, those same people are like, ‘Don’t worry, it gets better.’”

Both of their couple friends seemingly had it all together. One was hip, well-spoken, and ambitious, the other was mature, calm, and at peace but by the end the veil was lifted and it was clear that both were just playing their parts.

In the end Josh appears destined to be a cynic. No one cares that Jamie is a liar or that Darby seeks out other men or that Fletcher and Marina are dissatisfied with parenting. In fact, Josh appears to be the crazy one, “Josh, you know the world isn’t a giant conspiracy against you” states his wife.

Eventually Josh learns to let go of everything. He lets go of the jealousy, the hypocrisy, the disappointment and moves on in his life. And for Josh it’s less about beckoning Dylan Thomas as he doesn’t “rage against the dying of the light” and, in fact, he goes into the night gently. By the end Josh fittingly emits more of a modern poet in Childish Gambino, “I mean nobody out here’s got it figured out so therefore, I’ve lost all hope of a happy ending”.

While We’re Young is a film about aging but it’s also about learning to let go of things you can’t control. The movie doesn’t tell you to live your life to the fullest or to settle down and have children, it’s urging you to live the life that means something to you and don’t worry about what others are doing because it turns out those seemingly happy people you see everywhere, yeah, well they are just full of shit and probably as miserable as you. 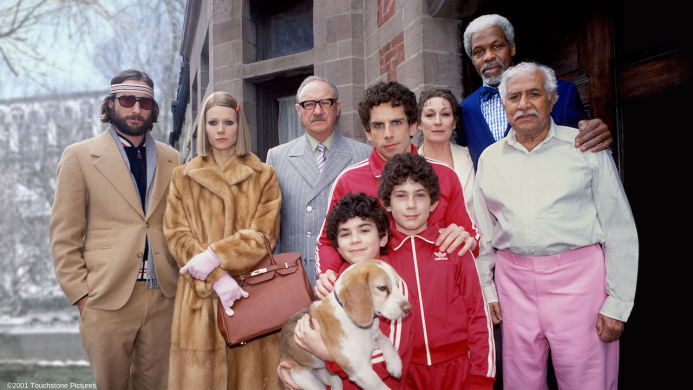 There is a scene in The Royal Tenenbaums that always mesmorizes me. No matter how many times I see it, no matter what else I’m doing, I instantly get swept up in its beauty and simplicity and come to admire it even more than before.

Margot and Richie have been in love for a long time, dating all the way back to their childhood. Summoned back home after a prolonged absence, they arrange to meet at, “the pier by way of the Green Line Bus.” As Margot steps off of the bus, and spots Richie awaiting her arrival, their eyes lock and their expressions soften and not a word is needed to understand how these two truly feel about each other. They are wearing nearly identical colors, casting off a dreamlike hue as if they are the only people in each other’s worlds that stand out. Nico’s cover of Jackson Browne’s “These Days” plays over the scene, suggesting that these two never really got to be together and that their love as a whole was a missed opportunity.

Of course, none of this takes into account that Richie is Margot’s brother and Margot is his adopted sister. It wouldn’t truly be a Wes Anderson movie if there wasn’t one absurd little tidbit that threw the entire idea of this potential courtship out of whack. Richie later discusses his love for Margot with his father, Royal (played by the legendary Gene Hackman) and the following exchange takes place:

Royal: “It’s illegal though, right?”
Richie: “I don’t think so, we’re not blood related.”
Royal: “But probably frowned upon. But then again, what isn’t these days?”

That line made me wonder about what the reaction would have been if The Royal Tenenbaums had been released these days. Would there have been a giant backlash towards the Margot/Richie relationship on the internet or would they have been in the clear thanks to Game of Thrones’ portrayal of full-fledged incest? It’s safest to assume that people will get offended about anything that is even the slightest bit controversial. But as I rewatched the film recently, I realized two things: 1) I’m glad that certain movies were made before the advent of social media and 2) I really miss seeing Gene Hackman in new movies.

Probably a lot more than the other people in this movie missed his character.