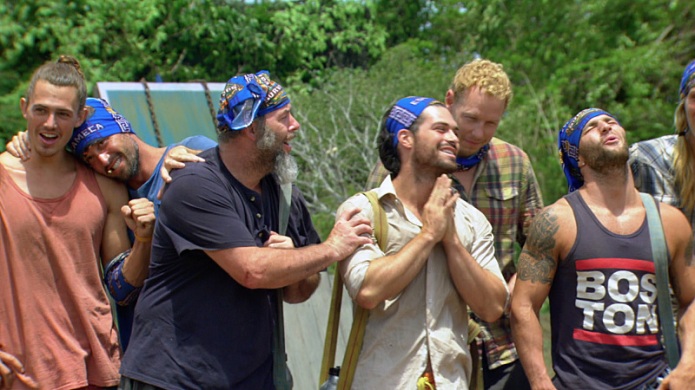 Come on in guys for my Survivor Worlds Apart Episode 6 Review where I use classic Survivor quotes to assess the latest episode.

Ever since Rob and Amber in Survivor All-Stars (22 seasons ago!), pairs have been notoriously feared. Season after season, numerous pairs were broken up if two people even acted like they liked each other. Soon the pair strategy became far too dangerous and the game turned into a safety by numbers dynamic.

Eventually the pairs strategy evolved. Thanks to the likes of JT and Stephen from Tocanthins, it is proven that the pair strategy can work if the pair is extremely unlikely and if they keep it on the downlow. Think Denise and Malcolm, or Tony and Trish. Sure both pairs started on the same tribes but the two people are so different that nobody assumed they worked together.

So far this season we have seen a reemergence of the fear of pairs. Some pairs that seemed destined to work well together like Max and Shirin, and Rodney and Joaquin, were quickly dissolved before they got a fair shot. Some obvious pairs still exist in the game, namely Jenn and Hali, and Dan and Mike. The show is telling us these pairs are not welcome on the island. Somewhere hidden in the social dynamics there is an unlikely pair that could run this game. Could it be Mike and Kelly? Or maybe Tyler and Carolyn? Hell, anyone and Will? Keep an eye out for this and take a jump with me and I promise I won’t bore you about my bromance with Jesse.

What happened to this cast? The first three episodes they were quote machines! Lately they are either painfully obvious statements like, “A power couple can make power moves” from Mike. Or they are thinly veiled attempts at a winner’s edit like Jenn who felt better about her chances at winning the game thanks to a turtle’s low life expectancy.

Wow one of the few times I believe throwing a challenge wasn’t completely insane. It makes total sense from Mike’s perspective (not so much Rodney’s). Mike had the numbers, at least when it came to blue collars. And his team was strong enough to win a challenge next week if they don’t end up merging. Plus he helps Kelly on the other side. Not only does he protect her but he can also use it to bait her back to his side at the merge. A great move all around for Mike.

The bad decision this week belongs to Rodney. His failed attempt to hide his bro-love for Joaquin was a complete disaster. I’m shocked he didn’t get down on a knee and propose to Joaquin with a bottle of whey protein. Even Joaquin seemed overwhelmed with the affection and underwhelmed with being stuck with Rodney.

Some might say Joaquin should be blamed too. But I completely disagree. Joaquin and Tyler were able to hide their mini bromance with each other. People assumed they were together because of the White Collar thing but other than that those two were polar opposites. They could have made a run to the end as an unlikely pair.

Unfortunately they both made a drastic mistake in isolating Joe. Using Joe and Sierra they could have even convinced Rodney to dump Mike. That way the Blue Collar alliance is fractured without it’s best strategist and challenge threat.

Rodney’s self-awareness was most shocking to me. Look I know that he had no clue that Joaquin was going home.

Yes he was completely blindsided. But early in the episode he stated that he was aware that everyone at home thought he was an idiot. Hey he might have no shot to win the game but self-awareness can take you extremely far.

Dan I am sorry but I have given up on you completely. You are Rupert 2.0 but more All-Stars and beyond Rupert than Pearl Islands Rupert. You will get far, you might even get to the final tribal. But you cannot win this game because you are socially inept. If I were Mike I wouldn’t have let you near Sierra leading up to Tribal Council. It is best for your game to stay quiet and to be kind but I find that you are incapable of that.

Kelly is in a great position. We know the tribes are merging next week and we know that Mike wants her back. But she has gotten to know these new people for about six days and I bet they like her too. As long as the attention doesn’t get to her head she should be able to make a good plan to stick to.

Despite the flawed social game early on Mike has played a damn good game. Everyone seems to turn to him when they don’t know what to do. Dan feels like he has to stick with Mike. Kelly feels like she owes Mike and that she can trust him. Sierra admitted that Mike was the only Blue Collar she likes. Joe trusted Mike enough to work with him. Tyler doesn’t seem threatened by him. The only person that could have a problem with Mike is Rodney. I have a feeling that Mike will talk Rodney off the cliff and explain that he made the move in the Blue Collar’s best interest.

Besides that with Joe, Tyler, and Rodney still in the game there are many alpha-male shields for Mike to hide behind. Watch out for this guy.

I never, ever expected to be sad to say goodbye to Joaquin. But this dude totally won be over. Perhaps it was because next to Rodney he didn’t seem like too bad of a guy. Sure he is kind of a sleazeball now but he also seems like one of those guys that will settle down with a nice girl and mellow out as he gets older. He seemed like a positive guy that would be fun to hang out with. Sad to see him go.

One thought on “Survivor Worlds Apart Episode 6- Blindsided by Bromance”