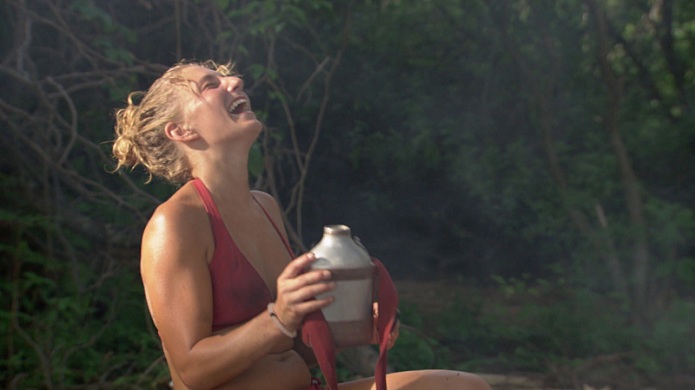 Come on in guys for my Survivor Worlds Apart Episode 9 Review where I use classic Survivor quotes to assess the latest episode.

Way back in season 1 of Survivor there was a wonderful contestant named Greg Buis. He invented the nature phone, saw some cool flying fish and did not count his chickens before they hatched.

Greg is still one of the most unique contestants to ever grace the screen on Survivor. Why? Well all of this and because he did not give a shit about the game…allegedly.

Call it strategy or call it hipster but Greg was above the game. He was there to have fun and mess with people who were taking the game seriously. Production could hardly handle him but America couldn’t get enough of him.

When his name was on the chopping block he basically threw in the towel. He acted like he didn’t care, like he didn’t want to play anyway. And when he was voted out he expressed a large amount of mock sadness.

Maybe he didn’t really care about the game. Or maybe it was all apart of his strategy. Or perhaps he was a poor sport that dealt with losing in a very unique manner.

29 seasons later and we finally have found our Greg Buis 2.0. She is funny, she is kind of mean and she gives absolutely zero f***s. Jenn Brown everyone!

So Jenn is making it known she doesn’t want to play anymore. And she is actively trying to quit in the most creative way possible. Thanks for trying to make it entertaining Jenn but you can go ahead and leave if you aren’t having fun.

Then again back in Survivor Amazon there was a certain female contestant named Jenna who wanted to quit on day 36! And look what happened to her.

Well usually I would have quotes here but Rodney’s impressions beat anything and everything that was said this week. Rodney pulled a Cesternino and killed it with his Mike and Dan impressions. If Rodney gets to the end, he should argue the entire Final Tribal in impressions and I guarantee you he wins.

Oh and this happens. I know this is the quote section but there are no words that could beat this. 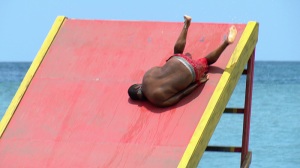 Joe and Mike needed each other. Both were shown as leaders of their alliances and both were challenge beasts. And they were both afraid of each other.

But how do two alpha-males co-exist? And how do they survive a game where everyone knows they are the biggest threats? They work together.

These two teamed up before to oust Joaquin right before the merge. So why not continue that teamwork? Joe would be Mike’s shield and Mike would be Joe’s shield.

My guess is that Mike knew this and he wanted to work with Joe. But Joe was just too damn good and the rest of Mike’s alliance wouldn’t allow it.

Well Joe is gone which means Mike’s shield it gone. And with people like Shirin pointing out to the others that Mike is going to win, it is time for Mike to find a new shield. If the preview is accurate it looks like Mike will be throwing Rodney under the bus.

It was a shock to see some in game sponsors for the reward challenge again. Other people might shake their heads at these product placements but to me it is a sign that Survivor is doing well enough that companies are investing money into them. Besides its better than the Jack and Jill movie marathon from South Pacific.

Another surprise is the redemption edit that Shirin is getting. Everyone seems to be annoyed by her but she is gaining more airtime and is heard saying things like she has a plan and she understands the game.

The editors even played up her revelation about being able to choose between Jenn and Joe going home. The thing is, that is a fairly obvious idea she had. Plus either way one of your biggest allies is going home. The editors really overplayed the importance of her decision there.

That is until Mike made the same realization and decided to test Shirin’s loyalty out much like he tested Will’s previously. Shirin seemed to have passed the test by voting out Joe so perhaps this vote was vital to her being in Mike’s endgame plans.

To recap Shirin is getting more airtime including some pity about her being bullied. Plus her moves are getting a positive showing by the editors even when they aren’t as big as they make them to be. I definitely see Shirin in the final four at this point. And after the start she had that really surprises me.

I was going to tear into Jenn in this section. I don’t like quitters at all. But she is still technically in the game and she has been very important so far. Perhaps she will pull a Holly Hoffman and suck it up and use that story a la Jenna Morasca and win the game. Crazier things have happened so I am not selling her yet.

Instead I am going to take a surprising turn on somebody that I previously liked to win. Carolyn has been quiet, smart and she has an idol in her pocket. She is in the majority alliance and has a sub alliance within that (Tyler, Will and Rodney) plus a sub-suballiance within that with Tyler. This girl should be good to go to the end and win right?

Well not so fast. She has the board set up but there are two factors going against her.

One, she hasn’t been shown doing much in the game at all. She still has time to change this of course. Last season Natalie didn’t start swinging until a few votes after the merge. So it’s not too late but it is about to be if she doesn’t stand up soon.

Unless she quickly changes course and takes charge of making smart, strategic decisions, I don’t see the jury looking at her too favorably.

Is Rodney a younger more calm, cool and collected version of Tony? Both are from the east coast and both weren’t taken seriously in their seasons. Tony earned the respect of those doubters by playing a wild but calculated game of flipping between alliances. Meanwhile Rodney’s screen time is all about waiting to make the perfect move.

Well that time might be coming sooner than Rodney is planning but for now he should stick to his plan of playing calm until it is time to make a move. Once he does this game could be all his.

Until Rodney pulls his big move it is still Mike’s island. He continues making allies by playing nice with Shirin and even giving her a test of her loyalty. He has been balancing an extremely large alliance for quite some time now and it is very impressive.

But I have a feeling that everyone on the island is aware that he is running the game. I bet they all have plans to eliminate Mike sometime soon. Luckily he has many allies he can use and an idol that no one knows about. But now that Joe is gone, Mike will be walking on eggshells.

You are in full control Mike but it is going to take a hell of an endgame for you to win the title of Sole Survivor.

Say it isn’t so Joe! Our Survivor Golden Boy is gone. Joe Cool is too cool for Survivor. His hair is too flawless even for Malcolm. He was the guy that could do no wrong. He was Survivor’s most interesting man. Of course he knows sign language. Of course he is a skilled jeweler. I bet he was relieved to be voted off so he could focus more of his time on feeding Nicaragua orphans and reuniting them with their families. That’s how awesome Joe is, isn’t that right Joe? 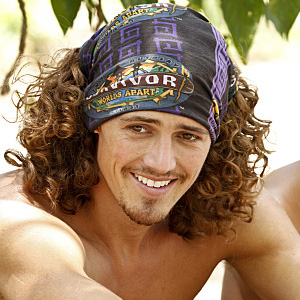 Dammit Joe you were too perfect. Stop it Joe, just stop it.