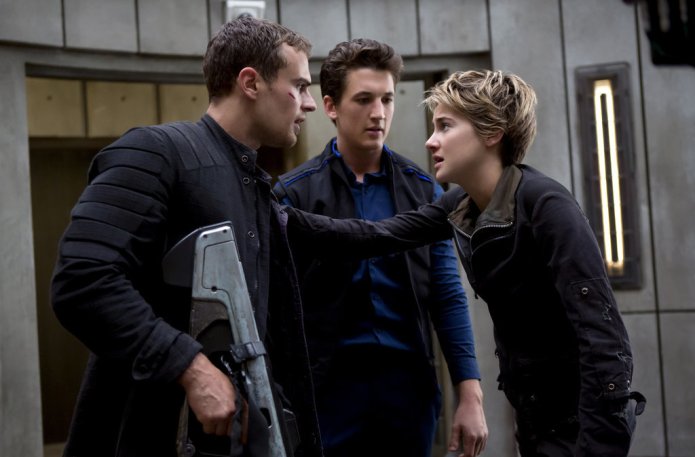 I should begin by saying that I wasn’t in the greatest state of mind when I watched Insurgent. It was an emotional weekend for my family and my girlfriend was sick as a dog, so it’s not like I was all cheery and rosy, the kind of mood you should be in before you fire up Insurgent in your blu-ray player. Or your DVD player. Okay, fine, on Netflix. Damn kids and your streaming.

The problem with Divergent was not with its entertainment value, but its inability to separate itself from other entries into the dystopian young adult genre. Apparently, Insurgent didn’t learn anything from its predecessor and is perfectly okay with being the sequel we all knew was coming. If you’ve seen The Hunger Games: Catching Fire, you’ve seen this movie. A much more enthralling and engaging version of this movie, and therein lies our issue.

Shailene Woodley reprises her role as Tris, the heartbreaker to teenage boys everywhere and the savior of the world. If I sounded conceded just now, well, I apologize. After her actions in Divergent, Tris is public enemy no. 1 and Jeanine (Kate Winslet) has launched a manhunt to track down all Divergents. It is at this point that the story stirs up echoes of Catching Fire and the writing begins to slip up.

I don’t think I covered enough positives in my Divergent review, so let’s start there. Woodley really is a talented young actress. Folks who suffered through The Secret Life of the American Teenager may disagree (right Kevin?), but I think sometimes she just chooses bad projects. Her work in The Descendants, The Spectacular Now and The Fault in Our Stars proved to me what she is capable of. She brings a lot of the same qualities that were on display in those movies to the role of Tris, and I think she certainly gave it her all. There’s also a score of well-filmed action sequences and overall I found the tension to be up to par.

Unfortunately, these strengths can’t overcome the limitations of the story because it just isn’t that interesting. Part of the blame can be laid at the feet of the script, which is painfully similar to Catching Fire. We have our promising young heroine, trials that she underwent in the first movie and must face once more in this one, a villain intent on killing the heroine only after she gets what she wants from the heroine and a twist ending that blows everything we thought we knew to smithereens. Now I haven’t read the book. I can’t say for sure if this is a faithful adaptation of the source material and if so, if author Veronica Roth knew that she was emulating Catching Fire so meticulously. Or if the filmmakers saw how well The Hunger Games series was doing and just wanted a piece of the pie. Whatever the case, the plot is severely lacking in originality.

Then there’s the characters, mostly played by additional talented actors who are squandered on meaningless roles that haven’t improved since Divergent. I’ve always been a fan of Naomi Watts and Miles Teller rivals Woodley as one of young Hollywood’s bright spots (his work in Whiplash speaks for itself), and I really believe they did their best with what they were given. As you can guess, they aren’t given much. Teller’s only purpose is to mouth off and create conflicts wherever he goes, with hardly any rhyme or reason as to why. His motivation as a character is incredibly hard to figure out and I spent most of the movie not knowing which side he was on, and sadly that’s not a compliment. And then there’s Winslet as Jeanine. This is a character who is impossible to connect with or fear, because the writers don’t treat her like a real person. Her angle is that she’s the antagonist, and it’s her job to perform all sorts of diabolical tests on Tris and other Divergents because that’s what a good villain does. I guess.

It’s such a grave misuse of an actress of Winslet’s caliber. Given the proper material, I have no doubt that she would make a thoroughly compelling and daunting foe for our heroes. Instead, her sole motive is to present hollow obstacles for Tris to overcome, so that the protagonist has something to do before we get to the meatier stuff in the next movie. Assuming that those parts are actually coming, which at this point I can’t say with much confidence.

Remember, I wasn’t exactly primed to enjoy a movie when I watched Insurgent for the first time. Maybe I would lighten up a little during future viewings and just appreciate this sequel for what it is. Or maybe that would only reinforce my initial reaction: Insurgent is a cheap imitation of a story I’ve already seen play out. I’m curious to see Allegiant because I want to know if this series can rebound and deliver something less conventional. I’m also afraid that it will only sink further down the rabbit hole of uninspired storytelling.