Come on in guys for my Survivor Millennials vs Gen X (I’m already sick of typing that dumb name) Episode 1 review where I use classic Survivor quotes to assess the latest episode.

Before we jump into my assessment of the latest premier episode of Survivor, I thought I could give a quick preview into what to expect out of Pegboards as we wrap up 2016.

The start of the 33rd season of Survivor kicks off the start of the fall TV schedule. Here at Pegboards we will continue* to recap The Walking Dead on a weekly basis with our Dead Rankings where Jesse and I compete to guess who is next to die on the show. Sound morbid and hilarious? It is indeed.

*I haven’t confirmed this with Jesse yet but let’s just say I will guilt him into it.

Aside from The Walking Dead expect to see weekly Survivor recaps, WWE coverage, weekly NFL rankings, a Stranger Things season 1 recap, some movie reviews and much more. If you have any suggestions for show recaps please leave a comment below!

Uh oh, I hate to do this but it looks like a cyclone is incoming. For the first time in three seasons, I’m going to have to evacuate the column. Just click below and I’ll be back before you know it. Spoilers below.

If you’re new to this blog allow me to explain my process. I review the Survivor’s game play by breaking my column up into sections titled by famous Survivor quotes. There are a lot of small jokes and references from Survivor history scattered throughout so if you don’t get a joke you better go rewatch all 32 seasons. Seriously go, I will wait.

No, don’t worry if you don’t get all my dumb jokes and references, you’ll catch up eventually. I’m a big Survivor nerd and I know way too much about the show. So enjoy reading about Survivor from my point of view.

Ahh let’s welcome back my favorite section of all tiiiime. Here I like to highlight my favorite quotes and moments of the show. This section has seen real, live action barrel racing (thanks to fan favorite and game changer SDT), loads of Debbie gifs, praising of quote machine Cydney Gillon and lots and lots of photos of chickens. What will this season bring us?

Well it’s a subtle start to say the least. Sure we have David’s pathetic attempts at breaking a stick, Taylor’s shocking revelation that he’s been to North Dakota (yes, to THE North Dakota) or even Hannah dubbing the Triforce alliance as “Kappa Kappa Survivor”. All of these moments are very worthy of this weekly reward but there was a better moment.

Let’s jump to when Jeff Probst strolls onto the Gen X beach to inform them of the evacuation. 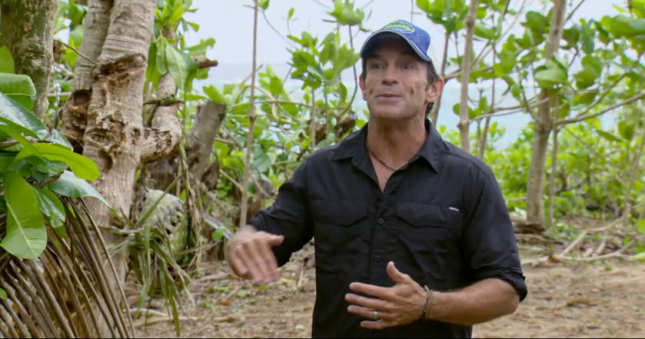 Jeff’s “we gotta get the fuck out of here” face

So after Jeff explains that they have all been voted out and Cyclone has been named the winner of season 33, Jessica raises her hand. No for real. Look:

She raises her hands and quickly asks, “Can we grab our bags before we go?”

Hmm, that seems like a fairly normal question right? Pretty innocent right? Anyone in that situation might react that way. There’s nothing funny about that right? But this is Survivor. Their bag literally has a canteen and maybe an extra article of clothing. Why so eager about your stuff Jessica? Why?!

Let’s back track to earlier in the episode. When we meet Jessica she reveals she is in possession of a “Legacy Advantage”, the first of it’s kind.

Jessica naturally stashes her advantage in her bag and moves on. When Jeff wanders onto the beach and says, “Hey your life is in danger, we gotta go!” Jessica raises her hand and says, “I feel ya Jeff, I really do and I know we are in danger but would you mind if I grab my super secret made-up advantage for this dumb reality game show?”

Don’t fuck me over Jeff

I don’t know what’s funnier, her fear of losing her advantage in the game when her life is on the line or her “sly” attempt to play it cool. It has all the subtlety of someone learning to play poker for the first time and raising their hand to ask, “hey so hypothetically is it good to have two little ‘A’ cards? Just curious…Asking for a friend.”

Do you smell that? It’s the smell of fresh Survivor players making classic mistakes on Day 1. It’s my favorite smell next to new carpet and Cam Newton’s tears. Let’s just list some of the classic Survivor mistakes we saw:

Seriously a little bit of basic math and keeping your mouth quiet goes a long way in Survivor and in life.

I was expecting to get hit over the head with the Generation Wars story line this season. But I was surprised the producers missed a few moments to point out the irony behind some of the moments this episode.

First of all, the Gen X’ers took the easy way out and used both shortcuts in the immunity challenge. How did Jeff not yell out, “The Gen X’ers acting like a bunch of Millennials by taking short-cuts in life!”?

Come on producers, stop going easy on these Gen X’ers.

Despite all the poor play I don’t see a specific person as a total disaster. Sure David has his issues but we will get to him a bit later on. If I had to pick one person I would go with Cece. She’s at the bottom of the older tribe. Which means they will likely lose another immunity challenge soon and she will likely get snuffed. What’s worse is she showed very little interest to force her way into strategic talk. I don’t like her chances.

I see a few alliances being built so far this season. On the Gen X tribe it looks like Jessica, Bret and Chris are the core alliance in their alliance of six. Meanwhile on the Millennials side we have the Triforce plus Michelle building a cohesive unit while Mari and Hannah are collecting their Freaks and Geeks buddies.

Overall the Millennials are in a better position has a whole tribe due to their physical prowess. But I think that Bret, Chris and Jessica alliance is building a strong foundation.

You better relax bro! (AKA who needs to relax…bro)

Hello David, why don’t you take a seat? I called you here today to welcome you to my Survivor blog. You see, I created this section, with the help of Rodney, just for you! You are the first winner of the “You better relax bro!” award. Congratulations. I bet this is better than any Emmy you ever won.

David is a literal representation of the audience’s own fears and weaknesses. He is a Survivor geek who came into the game knowing he had nothing to offer physically so he had to lie low, make friends and dominate the puzzles. He did none of the three! None!

Also he wrote for Family Guy. I’m eagerly awaiting David dropping a reference to a past season in Survivor and the editors putting the moment into the show.

In his best Peter Griffin voice, “Hey this reminds of the time Erik Cardona got clotheslined by a clothesline” Insert scene.

Anyway, David, I am 150 to 200 percent sure you can recover from your disastrous start but you need to remember to remain calm, cool and collective.

Rachel is probably going to be remembered as one of the more forgettable first boots. And honestly I think they made a big mistake getting rid of her over David or Cece. Rachel wanted to play with honesty and integrity and she didn’t know much about the game. That’s a person you stash on your alliance and deal with later. Sorry Rachel, you had a good strategy to coast to a 6th place finish but unfortunately you were (gen) X’ed out of the game.