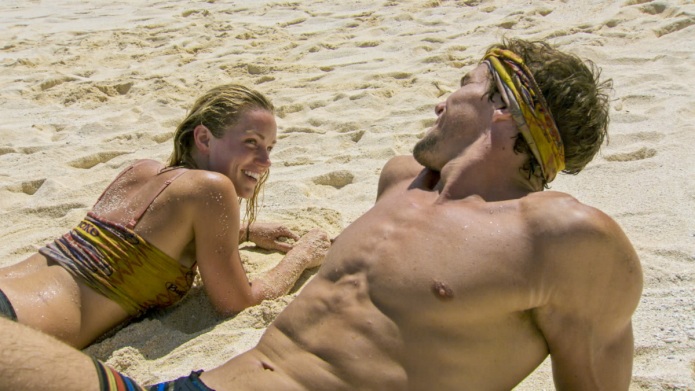 Hello and welcome back to our coverage of Survivor: Triple H!

Yes this is the place to come find out who the “Winners” and the “Losers” are of each episode. I’ll even throw in some “Hot Takes” to keep your interest.

Take the jump and find out what my Winners, Losers and Hot Takes are of the third episode of Survivor 35. Spoilers below.

Secrets between lovers- Love, especially between snails, is hard. Jessica learned that the hard way after her dreamboat Cole dished the news of Joe’s idol to her…and then to Roark…and then to Desi. So much for our little secret I suppose.

Rocks that look like octopuses- Poor Patrick, he was goofy, fun loving and unique which are great qualities if you’re on Spring Break but not so great for a social game like Survivor. The moment he was trying to convince everyone that a rock underwater was actually an octopus was the moment I knew he was done for. That was too random and wacky to be in the show for it not to mean something. And for Patrick the rocktopus meant he was too weird to stick around.

Idol hunts- Last season the contestants found 45856 idols before the merge. This season they’ve only managed to find one. Normally this might be boring but at this point in Survivor it’s refreshing to not have to worry about all of the twists and turns. Instead we get to focus on the characters of the show.

Lack of Reward Challenges- Speaking of character development on the show (hell of a transition Kev), the lack of reward challenges in the first three episodes has meant for more time with each player. Typically they don’t start individual (instead of the combined reward/immunity challenges) reward challenges until later in the season but I for one would be fine not seeing these until after the merge. They have a purpose in the social dynamics of the game in the merge phase of the game but before that they don’t do much in the way of story telling.

The Intentional Matsing- Aww yes, ever since season 25 made the three tribe split cool again us Survivor fans have discussed the possible benefits of an Intentional Matsing. Matsing was a tribe in season 25 that lost the first four immunity challenges which meant they had to vote out four out of their six members before being split up into the other two tribes. The remaining two castaways turned out to be the winner and a three time Survivor player. Which gives credence to the theory of the Intentional Matsing. By losing early on in a three tribe format the other tribes could see you as less of a threat thereby letting you get deeper into the game.

This is probably why the Hustlers were cool with being a Tribal Council for a second straight week. They appear less threatening and will have more room to play. Does this mean they set themselves up intentionally? Not necessarily but it is just another possible example that playing the Matsing game might not be a terrible idea if you are the two or three people in power.

I think the Healers should have thrown that challenge. I’m not someone who believes that throwing a challenge is always a bad idea. I think Cole was right in his attempt to convince the tribe to throw a challenge to blindside Joe with an idol. It looks like he and the three girls are tight, they’ve survived the first eight or so days and they haven’t been to tribal yet. Now is the best time to go through that experience before a swap because they need to see what it is like to play the game. And if you have two people who are definitely on the outs (Joe and Mike) why not rip the band aid off and treat the first tribal as a warm up for the rest of the game?

Until next time, I got nothing for ya. Head out.