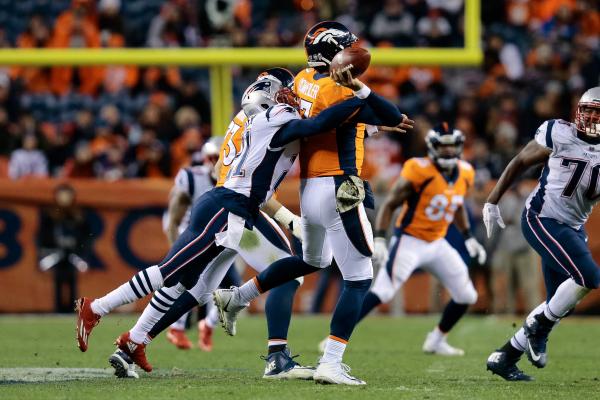 It seems like every week, I come on here and highlight some significant issues that the Broncos need to correct if they want to avoid another loss. And yet every week, without fail, the Broncos go out and commit all the same blunders and miscues en route to another pathetic loss. I’ve got to hand it to them. They are consistent at making their fans miserable.

Last night was no different. The Patriots came in and devastated the Broncos like we all thought they would, and with any hope at the playoffs all but gone, now there are some very serious questions to be answered over the last seven games. Does this coaching staff even survive to see 2018? Should the team fight for what little dignity it can muster or should it fully embrace the tank and play for next year? And how many punts does Isaiah McKenzie have to muff before he gets benched? I guess time will tell.

In the meantime, while I hate watching my team lose as much as the rest of you, I’m fully in support of embracing the tank. Anyone with a pair of eyeballs can tell that the Broncos have several glaring issues on their roster and if they want this dumpster fire of a season to be a one-time occurrence, then they’re going to need some quality draft capital. If that’s too hard for you to stomach, then my advice would be to spend a little more time at the Pepsi Center and Magness Arena until April.

That’s where the competitive teams in Denver are playing.

The Good (yes, there was some good)

That was one of the better games we’ve seen from Emmanuel Sanders in the past couple years. After appearing to be far less than 100 percent against the Eagles, Sanders bounced back and  hauled in 6 receptions for 137 yards against the Pats. It’s not really a surprise considering that he and Brock Osweiler developed a strong rapport back in 2015, but I guess it will probably be overlooked since not much else went right for the Broncos. Kudos to Sanders though for being one of the few guys on his team to make a difference last night.

I told you, I’m all about embracing the tank. The last time the Broncos had a top-five pick, they landed Von Miller. Being near the top of the order may be just what the doctor ordered to cure John Elway’s drafting woes. And considering this team still needs offensive line help and hasn’t had a franchise quarterback since, well, Elway himself, it’s unlikely that a better solution will present itself. You typically don’t find long-term solutions at those positions anywhere other than the top of the first round.

When your offense can only generate 16 points and your special teams practically hands the other team the game, you basically have to shut down the opposing offense to have any chance at winning. And that’s just not a realistic way to beat the Patriots. That being said, two weeks in a row now the defense has surrendered more than 30 points and are trending in the wrong direction in the second-half of 2017.

Maybe it’s just demoralizing to receive little to no help from the rest of your team each week. Maybe the weaknesses of the once dominant Denver D are starting to outweigh the strengths. Maybe not paying to keep Wade Phillips was the dumbest move of the John Elway executive era. It’s likely a combination of all those things, but the fact is that the defense can’t carry the Broncos to victory all by itself anymore. One more reason to embrace the tank and get some reinforcements for next season.

There’s really no other way to say it, so I’ll just give it to you straight: Olivo and McKenzie have been a disaster for the Broncos. Let’s start with the coach.

It sucks to have to write this, because I was really excited when Brock Olivo was hired in the offseason to run the special teams. He brought a lot of passion and vigor to his role, was saying all the right things and seemed like he would take full advantage of his first opportunity as a coordinator. Unfortunately for Olivo, I think the lesson here is that talk is cheap and unless you can deliver the results on gameday, it doesn’t matter how likable or enthusiastic you are.

The thing is, Olivo’s unit isn’t just underperforming. It has slowly degraded week by week until it is officially a catastrophic failure. The Patriots are a great team and if you want to have a shot at beating them, you have to play mistake free football. The special teams responded to that challenge by muffing a punt, allowing a kick return for a TD, allowing a punt to be blocked, having 12-men on the field when the Pats were going to punt and so help me God I can’t even remember what the other fuck up was.

It was one of the most egregious displays of bad special teams that I’ve ever seen. I’m sure Olivo will take the heat and say that he has to do better, but how can the Broncos justify keeping him on the staff after that? As for McKenzie, it’s not his fault that the coaches inexplicably keep putting him out there for punt returns after all the times that he has messed up. It is his fault that he seemingly has no idea how to field a punt, or doesn’t ever improve.

Suffice to say, there’s no accountability on this part of the team. Olivo doesn’t correct his unit’s mistakes even after saying that he needs to coach better, and McKenzie keeps getting more chances as the return man even though anyone in their right mind would’ve benched his ass by now. And if there’s no accountability on special teams, I can promise you that it’s trickling down from the top.

I’m about to be rather blunt in my criticism of the head coach of the Broncos, so remember, tanking this year is only going to help the team in the future. However, these are things that need to be said.

Vance “We Had a Great Week of Practice” Joseph is not a leader of men. He is not an expert on the X’s and O’s of football. He doesn’t really appear to possess any of the qualifications needed to be a great coach in the NFL, other than doing well in the interview. I’ll say this for John Fox and Gary Kubiak: their teams didn’t always perform up to expectations, but they were never embarrassed as thoroughly and as often as Joseph’s squad has been this year.

And I reiterate my opinion from last week, that it isn’t fair to make Joseph the scapegoat for the season. There are issues with the Broncos that go beyond him, but really as far as his performance is concerned, it all comes down to discipline and accountability. Against the Patriots and really any good team in the NFL, you have to have both, and the Broncos haven’t looked this lost and overwhelmed since before John Elway arrived to clean up the mess that Josh McDaniels made (another first time head coach that lacked those qualities). I don’t think any of us expected the Broncos to win this game, but it’s on Joseph to at least get his players to not beat themselves and sit guys down when they deserve it.

Saying “we need to do better” week after week isn’t accountability. Identifying what’s wrong and then trying to fix it is. As long as Joseph’s team comes out unprepared on game day and he sticks with players and coaches who are failing at their jobs, then there won’t be any accountability coming from the top. How can you ever expect the rest of the team to show any either?

During a good season, the Bengals usually give the Broncos a tough game. This one has been anything but, so there’s a chance this could go the other way. But remember, the Broncos gave the then winless Giants their lone victory this year, and those same Giants lost yesterday to the winless 49ers. Is it really logical to expect the Broncos to beat any other team at this point?