It seems like every week, I come on here and highlight some significant issues that the Broncos need to correct if they want to avoid another loss. And yet every week, without fail, the Broncos go out and commit all the same blunders and miscues en route to another pathetic loss. I’ve got to hand it to them. They are consistent at making their fans miserable.

Last night was no different. The Patriots came in and devastated the Broncos like we all thought they would, and with any hope at the playoffs all but gone, now there are some very serious questions to be answered over the last seven games. Does this coaching staff even survive to see 2018? Should the team fight for what little dignity it can muster or should it fully embrace the tank and play for next year? And how many punts does Isaiah McKenzie have to muff before he gets benched? I guess time will tell.

In the meantime, while I hate watching my team lose as much as the rest of you, I’m fully in support of embracing the tank. Anyone with a pair of eyeballs can tell that the Broncos have several glaring issues on their roster and if they want this dumpster fire of a season to be a one-time occurrence, then they’re going to need some quality draft capital. If that’s too hard for you to stomach, then my advice would be to spend a little more time at the Pepsi Center and Magness Arena until April.

That’s where the competitive teams in Denver are playing.

END_OF_DOCUMENT_TOKEN_TO_BE_REPLACED 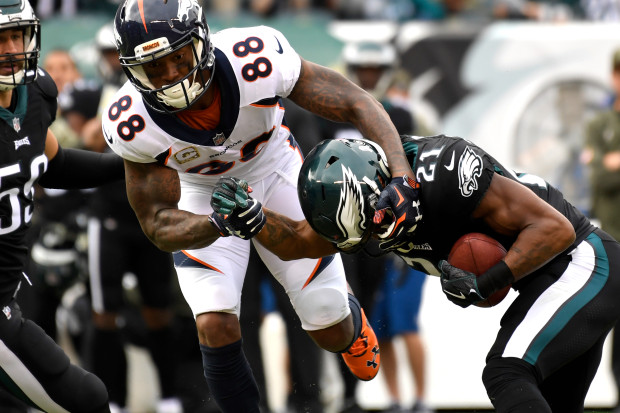 Last week, I spoke at length about the Sunk Cost Fallacy, and that moving on from Trevor Siemian at quarterback was in the best interest of the team. No matter how long the Broncos believed he was the answer at that position, it was better to wash their hands of the problem now rather than continuing to try and salvage it.

After watching the Broncos get annihilated in Philly on Sunday, it’s become rather clear to me that these sunk costs exist all across the roster, and the Broncos’ brass are going to have to decide just how long they’re willing to put up with them before they blow the whole thing up and rebuild it from scratch. Brock Osweiler is not saving the season. Vance Joseph appears to be in way over his head. The defense, while still very good, is worn out from carrying this team for the last three seasons and has some of the same crucial weaknesses that have been around for what feels like forever.

John Elway’s motto was always that he didn’t only want to win now, but from now on. The Broncos aren’t winning much right now and things may very well get a lot worse before they start winning again in the future. Maybe the motto should be, “Everything is terrible, who wants a shot of Jack?”

END_OF_DOCUMENT_TOKEN_TO_BE_REPLACED

You may not know this about Kevin, but he studied economics and is something of an expert on the subject. He recently introduced me to this concept called the Sunk Cost Fallacy, which is essentially a person’s refusal to abandon a resource because they don’t want to waste it, even though they are never going to get a full return on its value. I’m probably paraphrasing just a tad, but basically if I have tickets to a concert and can’t sell them or find someone else to go, I’ll still go to it myself to avoid having to eat the tickets.

And that’s where the Broncos currently find themselves with their quarterback situation, particularly as it relates to Trevor Siemian. Sure, it may not have cost them a whole lot to acquire the seventh rounder out of Northwestern, but they have certainly devoted a lot of time and energy into making him the starter for this team. He’s started 21 games for two different coaching staffs and seems to be regressing more with each one.

Moreover, the Broncos displayed a disconcerting amount of support for a player who didn’t deserve it based on his performance, and that’s where the Sunk Cost Fallacy kicks in. Saying things like “he’s our starter” or “he’s a young player and could get better” are highly irrelevant compared to what is actually happening, especially when everyone outside of Dove Valley could tell that Siemian is not the answer at quarterback.

And when you find yourself at a crossroad, the choice that you make could very well define the rest of your season. That choice for now is going with Brock Osweiler to try and salvage these last nine games. The Broncos may not fare any better with Brock at the helm, but they were going nowhere with Siemian. Kudos to the team for finally abandoning their sunk cost, even if it’s a bit overdue.

END_OF_DOCUMENT_TOKEN_TO_BE_REPLACED

John Elway spoiled Broncos’ fans during free agency his first few years on the job. There were always huge, splashy signings to look forward to and he had a knack for signing the biggest names available on the market, like a kid playing Madden with the salary cap off. That changed last year when the most notable players who came to town were Owen Daniels and Darian Stewart. Don’t get me wrong, those were two solid players, but it was a far cry from the days of reeling in Peyton Manning, Wes Welker, DeMarcus Ware and Aqib Talib. That’s what happens when you draft and develop great players and then have to resign them.

Like last year, a lot of those players will be leaving us. Here’s my look at what our free agents should do, even though we all know what they will do.