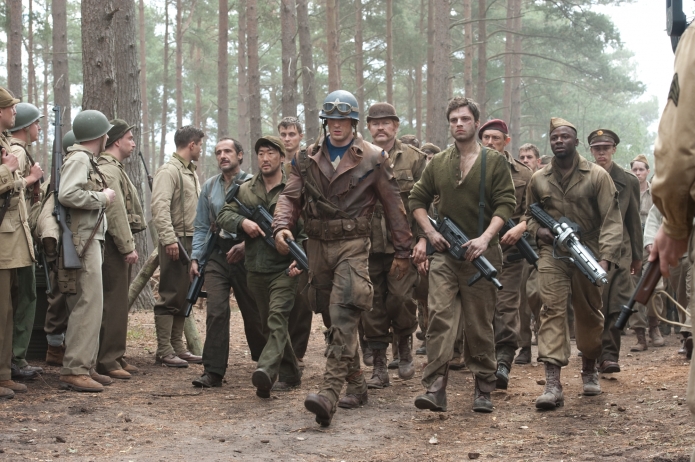 Peggy tries to convince him that they have time and other options, but to no avail. Cap isn’t a pilot and doesn’t know the first thing about disarming a bomb. “This is my choice,” he says to her, and then he puts the plane in the water. He knows he’s going to die and he does it anyway, because a good man fighting for a just cause will always see it through to the end. And because he’s fucking Captain America.

That part resonated with me more than any other scene in a Marvel movie since the first Iron Man, and it had me on pins and needles waiting to see Cap make the transition to the modern world and come to terms with everything that had happened to him (including, you know, not actually dying). As good as “The Avengers” was, there simply wasn’t much time afforded to any individual character’s development because there was so much else going on, but now that day is truly here friends. “Captain America: The Winter Soldier” comes out today and it just seems appropriate to do a review for the original movie first.

Seeing as this has been out for years now, I’m going to pretty casually wade into spoiler territory here and even if you haven’t seen The First Avenger, you definitely saw “The Avengers” and that spoiled this one for you anyway. Here we go.

I didn’t use to give a crap about Captain America. He’s not exactly the most appealing superhero out there and when you’re a kid, it’s just natural to be drawn to the more popular ones like Spider-Man, Batman and the X-Men. That’s not necessarily a shortcoming on Cap’s part so much as I didn’t fully understand what makes this guy special until I became a little older. When I read “Civil War,” the Marvel comic where its cast of characters are forced to register their identities with the government or be labeled as treasonous vigilantes, I loved that Cap spearheaded the resistance movement. He remained true to who he was and didn’t compromise his beliefs just because his friends or his superiors were telling him to. That’s the mark of both a strong protagonist and a relatable human being. Oh, and Cap can throw down and kick some serious ass when needs be, further proof that he is totally awesome.

I believe that The First Avenger was able to effectively capture all of the elements that make Cap great as well as craft a satisfactory summer popcorn flick. The film puts Cap through a great deal of trials and tribulations and by the end he’s had to overcome more than most to take down the bad guys. Not only does he lose his mentor, Abraham Erskine (so wonderfully played by Stanley Tucci), but then he watches helplessly as his best friend, Bucky Barnes, falls to his “death” from a train. Then there’s the end, where Cap loses Peggy and everyone else that he cares about and awakens almost 70 years later in a world that he doesn’t recognize. The small character moments give this movie a lot of heart and you really feel the sincerity of all the different performances.

A lot of the credit for that goes to Chris Evans, who rose to (semi) stardom when he portrayed the wise-cracking Human Torch in those god awful Fantastic Four movies. The fact that Evans had the guts to don a different hero’s tights is one thing, but I think you have to realize the sheer difficulty in pulling off this role, one in which you run around in a spangly outfit with the letter “A” stamped on your forehead. There’s a reason that Cap was cannon fodder for Tony Stark’s relentless verbal barrage in “The Avengers,” so it takes an actor who can really embody the more virtuous characteristics of Steve Rogers to make it all relatable and believable. Evans succeeds in that area tenfold and I immensely enjoyed what he brought to the table. In his hands, Rogers starts as the ultimate underdog who just wants to have a chance to do his duty. He gets a rare opportunity to infinitely improve himself and goes for it, not because he craves personal glory or respect from his peers, but simply because he aspires to be the best possible version of himself and nothing more. Isn’t that how all of us should approach life?

It’s not a perfect film by any means. A lot of the action gets condensed into these really brief montages and there’s a few instances where the tone shifts and things become pretty cheesy. Another aspect that didn’t turn out as well as I wanted it to was Hugo Weaving as The Red Skull, a character who clearly sells the fact that he is evil and has morbid intentions but never feels overly threatening or sadistic. I just expected a little more from Cap’s arch-nemesis. That being said, these are more minor gripes than major detractions.

Too often nowadays comic book movies struggle to remember the importance of what makes their superheroes human. They are extraordinary people, no doubt, but at their core they are dealing with issues that are far more troubling than what a normal person could handle. In the end, that’s what makes them special and unique and the powers that they possess are just the icing on top of the cake. The First Avenger is a success because it takes that lesson to heart and presents Captain America as one of the most likable and admirable characters to come out of the Marvel Cinematic universe. I will always cherish this film and I can’t wait to see where the character goes from here.