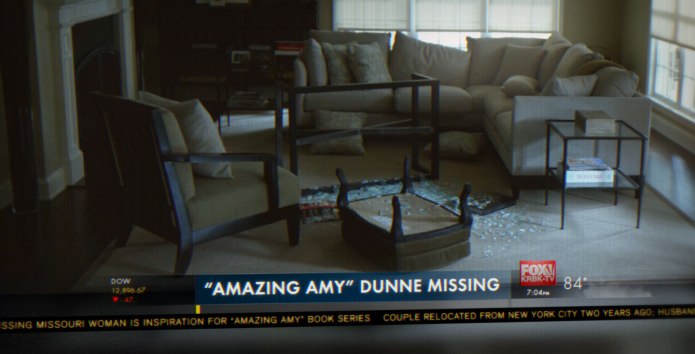 “What are you thinking? How are you feeling? What have we done to each other? What will we do?”

I’m not the biggest fan of the Academy Awards. Sure, I enjoy watching overpaid actors play nice and revel in each other’s success as much as the next schmuck, but it just seems like the movies that should win aren’t often the ones that take home the Oscars. Considering that any discussion about which film is truly “the best” is a subjective matter, you and I could sit here all day and debate how many truly legitimate winners there have been over the years. We would probably disagree and insults would be hurled back and forth, but that’s normal. As Kevin so astutely pointed out in his Survivor Preview a few weeks back, humans judge one another with little to no evidence to support these judgments. It’s what we do. So if you think that I’m a moron when I say that Gone Girl should have been nominated for Best Picture over many of the films that were, including American Sniper, Boyhood and The Grand Budapest Hotel, then I recognize that you are just succumbing to human nature. And I forgive you.

And seeing as I’m putting all of my cards on the table, let me just point out that I thought Birdman was a tremendously directed and well-crafted film. I have no problem whatsoever with it winning Best Picture last week and I was pulling desperately for Michael Keaton to take home that Best Actor award. But more on that later.

Gone Girl is twisted, irresistible and disturbing. It takes great pleasure in roasting the idiocy of the media and the disheveled nature of mainstream murder investigations. I would be cringing during one scene and laughing the next, but no matter what I couldn’t look away. The two and half hour run time flew by. No matter how badly I needed to go to the bathroom or get up for a stretch, I never left my seat. I wanted to absorb every scene and witness every turn of events, and yet, the questions changed every time I thought I had the answers. For this is a David Fincher film, and nothing is ever what it seems. However, the most impressive feat that Gone Girl pulled off was something that previously I believed to be impossible.

It made me feel sorry for all of the married men in the world.

Fincher’s latest tale of murder and intrigue is the story of Nick (Ben Affleck) and Amy Dunne (Rosamund Pike), a married couple who started out happy but were hit hard by the recession and a move from New York to Missouri. On their 5th wedding anniversary, Nick returns home and Amy isn’t there. There are signs of a struggle and he can’t put his finger on where she went or why, so he fears that she was kidnapped. The police get involved and though Detective Rhonda Boney (Kim Dickens) tries to help him, clearly they suspect that Nick may be hiding something. Information revolving around financial troubles and a growing rift between Nick and Amy only heightens that suspicion. The media eats all of this up with a spoon, delightfully skewering Nick’s reputation despite the fact that there is no body or concrete evidence to implicate him. To reveal any more of the plot would be a grave injustice on my part, so that’s all I’m going to give you. What’s important is that I was completely engrossed by this movie and I truly do believe that it was robbed by the Academy, and I like all of the movies I mentioned earlier. But this one deserved to be recognized in that same category.

The biggest reason behind that is one Rosamund Pike. Did you know who she was before Gone Girl was released? I only vaguely remember seeing her in A World’s End and honestly never gave her a second thought. After this, I doubt that I’ll ever be able to forget her again. Pike as Amy is a beautiful explosion of volatility and vulnerability, and you never really know what she’s going to do next.  It’s so difficult to analyze her role without giving anything away, but let me be clear when I say that this is the best performance by an actress that I have seen in quite some time. Again, this is a subjective matter, but what are we talking about when we discuss the term “best actress?” Should we just be looking for an entertaining showcase in a film that we would gladly fork over $10 or more for to see in a theater? Or should we aim a little higher and seek out something truly groundbreaking? Pike’s Amy is a revelation because it puts everything that she has to offer as an actress on display: the way her eyes flash when she feels threatened, the control she has physically over her body to match her movement with the mood of the scene,  how easy it is to forget that there is so much more beneath the surface when she dazzles you with her smile. Pike was perfectly fine in A World’s End, but I had no idea what she was capable of until I saw this movie. That’s what I’m looking for.

Quite simply, the movie doesn’t work without having Pike in the fold, and leave it to Fincher to serve as the master of ceremonies for her coming out party. Seven, Fight Club, Zodiac and The Girl With the Dragon Tattoo are all excellent films, but the one thing they all have in common is the delight that Fincher takes in exploring the psychological underbelly of human nature, and how society determines where the line is drawn between deviance and normalcy. Between monsters and men. It’s the perfect performance for a David Fincher movie, and it’s so satisfying to watch as the acting of Gone Girl constantly elevates the directing, and vice versa. Ben Affleck continues his career resurrection as a man who gets caught up in a storm he didn’t anticipate, and can only watch in frustration as his life begins to implode around him. As the audience, we don’t know if he is guilty or not and that makes Nick all the more compelling as a character. You want to sympathize with him, but you don’t know if you can trust him or not. Affleck delivers some very subtle work here, putting to bed once and all for the question of whether or not he is talented. He most definitely is. The rest of the supporting cast more than carries their weight too: Dickens as the diligent detective, Neil Patrick Harris as Amy’s ex-boyfriend, even Tyler Perry as the infamous lawyer Tanner Bolt.

That’s right, Tyler Perry is good in this movie. Chew on that for a second.

Fincher is a truly superb director because he never fails to hold your attention (and because he got a good performance out of Tyler Perry). Gone Girl is equally perverse and enthralling with a hell of a performance from Pike and a quality story through and through. I’m not sure that it quite reaches the level of Seven or Fight Club, but it is a worthy addition to Fincher’s increasingly impressive resume.

Just think twice before you get married, fellas.