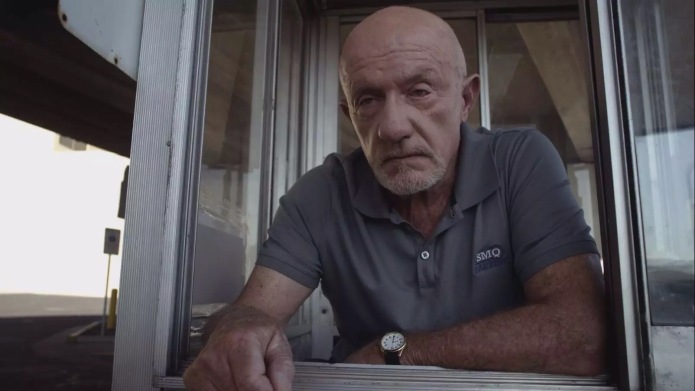 The first episodes of Better Call Saul worked hard to distinguish itself from the shadow of Breaking Bad. The latest episode, “Alpine Shepherd Boy”, on the other hand, felt like it could have easily fit into Walter White’s story.

Although not a ground breaking episode, the cold opening, the slow pacing and the small-detailed character development of the episode really showcased what Vince Gilligan does best.

It begins with the cops arriving at Chuck’s house. They demand to know why Chuck “stole” his neighbor’s paper. While Chuck rambles on with his best lawyer speak the cops sneak around the back and determine that Chuck is dangerous. They break in and tase Chuck like he is streaking at a baseball game.

We catch up with Jimmy who is suddenly a busy man thanks to his less than ethical billboard stunt from the previous episode.

Jimmy meets up with Ricky who shows off his wealth with stuffed lion and zebra heads. Ricky discusses his desire to break off from the USA and offers Jimmy $1 million cool ones to help him. Jimmy keeps his cool and agrees. Unfortunately Ricky comes back with cash that is somewhere below Monopoly money in its usefulness.

Next Jimmy meets with a cheery guy named Roland. After signing a NDA, Roland shares with Jimmy his ground-breaking invention, a positive reinforcing toilet. Jimmy points how the sexual innuendoes that the toilet flushes out and is promptly shown the door by Roland. Don’t worry Jimmy, the only way that idea breaks the bank is if Morgan Freeman agrees to do the voice. That was a mighty fine dump Andy.

And finally Jimmy wraps up his Albuquerque tour by helping an old lady write her will for her figurines. At this point Jimmy is depressed and anxious. That is until the old lady gives him some cold hard cash. This might be the first and last time that we see Jimmy get money that he fairly earned. You’ve been warned.

At this point Jimmy is finally notified of his brother’s apprehension and goes to see him in the hospital. After nearly getting kicked out Jimmy explains Chuck’s problems. The doctor is unimpressed and recommends Chuck to be committed for 30 days. Which makes me want to be a doctor. Not sure what is wrong with the patient? Commit him. Where is Dr. Cox to solve mysterious ailments when you need him?

Chuck refuses and explains he is sensitive to electromagnetic activity. Reminds me of the time I convinced my parents I was allergic to grass so that I didn’t have to mow the lawn. That worked for years.

The doctor is not impressed and believes it to be a manifestation of something else. She even proves this to Jimmy by sneakily turning some sort of electricity on without Chuck noticing. Which is like the time my parents realized I played football on the grass every day with no ill effects and I finally had to start mowing the lawn.

Howard from the law firm comes by to check on Chuck. This act is described as selfish by Jimmy because if Chuck is committed, Jimmy can cash him out of Howard’s law firm. Out of spite Jimmy agrees to commit Chuck.

Later Jimmy realizes that the only thing better than respecting your elders is taking their money. He begins a Jell-O ad campaign similar to an ad campaign I am considering for Pegboards. Unfortunately not much rhymes with Pegboards and the pudding company isn’t answering my calls.

After a long day of hitting on old people, Jimmy decides to call it a day. He proudly presents Mike his parking validation. I’m not sure how Jimmy knew Mike didn’t care for Jell-O but he must have known because he did not offer him any. Instead he gave Mike his business card.

The episode shifts to Mike and we see him in a few familiar places. First in a diner, eating alone. Second in his car watching a mysterious young girl. And finally at his home being possibly apprehended by the cops. Some things never change.

The episode wasn’t the most action packed but as Ricky the lion hunter assured Jimmy we are, “getting’ in on the ground floor” of something great. Better Call Saul is proving to be an even better idea than a Morgan Freeman motivational toilet (Patent Pending).