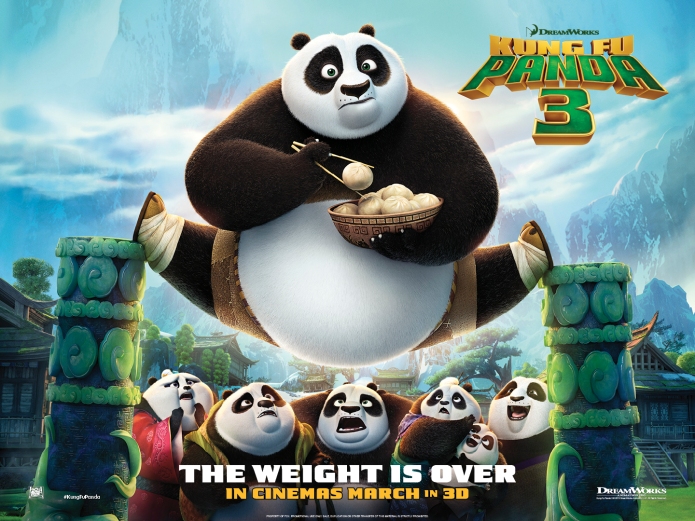 Sequels in Hollywood are a dime a dozen. For every original idea that gets adapted into a feature length film, we get 20 sequels or spinoffs based on existing properties. It’s easier to go with what worked before rather than come up with something new. Unsurprisingly, this approach fails as often as it succeeds, particularly in animation (Shrek the Third, Cars 2 and Minions all come to mind).

I’m happy to report that this isn’t the case with Kung Fu Panda 3. While it won’t make you forget about Toy Story 3 any time soon, it completes one of the better animated trilogies of our time. It all feels very familiar, but that’s okay.

Kung Fu Panda 3 doesn’t do anything you haven’t seen before. The “Dragon Warrior” Po returns and is the same affable hero we’ve come to love over the past eight years. He makes time for playing with his action figures and gourging himself in between stopping the bad guys. All of your favorite companions are back as well, including Master Shifu and Tigress. And there’s yet another unstoppable villain on the horizon, this time in the form of the returning Kai.

Sure, there’s some new material here and there, most notably the arrival of Po’s panda dad (Bryan Cranston, channeling Hal more than Heisenberg here) who is finally reunited with his long lost son. Po takes on the role of teacher at the request of Shifu and hijinks ensue. There are new laughs to be had, but this is hardly a new experience.

It may sound like I’m chastising Kung Fu Panda 3 for not being original enough, but I assure you that’s not the case. All I’m pointing out is that if you didn’t enjoy the first two, there isn’t anything notable about the third one that’s going to sway you. I liked the other Panda movies just fine and this one did it for me too. The main takeaway is that the film is entirely accessible and not a trainwreck like we’ve seen from other animated franchises that wore out their welcome.

Maybe that says more about how we manage our expectations for sequels when the highest compliment I can give is, “It wasn’t a disaster.” That’s not entirely fair to Panda 3. It does its job as the final (supposedly) act in the trilogy and qualifies as entertainment for the whole family without patronizing anyone. However, I didn’t walk out of the theater eagerly counting down the minutes until I could see the movie again. I also wasn’t seriously questioning my life or regretting throwing away two hours that I could never get back, and that right there is a win in itself.

If you’re a fan of this series, you should see Kung Fu Panda 3. It is refreshingly adequate.